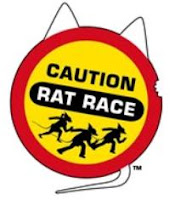 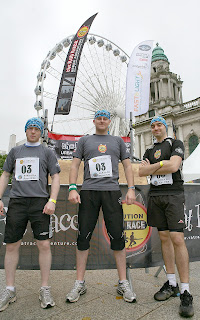 Saturday morning the rain was hammering down. Standing under the tent 07:30am at the event village bleary eyed. We looked at each other thinking are we wise. We decided to get down early and do the refresher course as Americo and Ciaran hadn’t done the rope work before. As we chatted and tried to stay warm thankfully the rain stopped. It was to stay dry the whole day and thankfully did until we crossed the finish line. 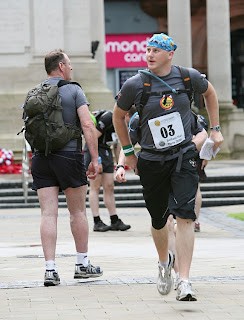 Mean Streets: First we got our maps and route instructions. We marked out the two Adventure/bike routes we would take later in the course. We all lined up out the front of cityhall for a mass start a run around the statue at the front of the grounds and pick up our quiz sheets. The quiz was questions relating to the City Hall with answers to be found in and around the grounds of city hall. We needed all answers to get our mean streets checkpoint clue sheets. We marked out the map and it was a fast run through the streets of Belfast to find our checkpoints with a few tasks thrown in for good measure. We headed to the crown bar first, then the gas works and round to the waterfront. We then ran to the big fish and all of us had to get under the tail of the fish. We headed for the Big Buoy next but think we should have got the two in Victory square as we later had to double back for these. From victory square we went up to Castle court for the first task the wii challenge in zaavi. Ciaran done this playing baseball on the wii. Then through castle court we had to find a leprechaun but were advised security had asked him to leave castle court. (Only in Belfast) Out the back to Smithfield market the spud peel task. We had to peel some potatoes and bag them again. From the market we headed for the city hall again just managing to get in one last checkpoint on the way back on a roof terrace. We missed two checkpoints in total but one was due to the castle court security so we didn’t mind that one. After we got the check points it was back to city hall to get the bikes.

Adventure loop 1: We left city hall heading through the center of town out past the Belfast telegraph and up the Antrim road to gates of Belfast castle. Dropped the bikes of at the gates of the grounds got an orienteering map and took of on foot for a run and checkpoint section that took us up the quarry trail over the top of cavehill and down the main walking path and back to the bikes. As we were running down the path Ciaran took a tumble and cut his knee. Luckily it wasn’t serious and he carried on with out stopping. This was tough enough going as the way up was so slippy it was hard to get running. We picked up the bikes again and left cavehill a fast blast down grays lane. At the bottom a group of kids were shouting about a checkpoint we nearly past it but a quick check of the map told us they weren’t kidding. We then headed back along the shore road looking for Ivan street that took us to the footbridge over the M2 and into the docks. We followed the road back to corporation street for a spud peel then headed back towards the city center. Here is were it started to go wrong. We looked back and Americo had disappeared we headed back to see if we could find him but we had no idea were he was. We decided to head on as a pair and hope we didn’t loose points for this. At queens bridge it was across and out past the odyssey to the back of the airport and the old Navy base now occupied by ocean youth trust for a rope tie task. Then further out the airport road for the 3 mile time trail section. 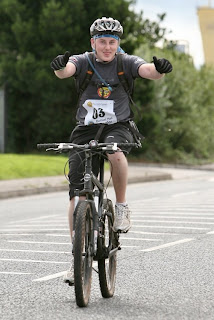 This was going great on the way out feeling great I thought it was easy then we turned and it was straight into headwind the whole way back. From this task it was a windy long cycle all the way back to city hall were we thought we would find Americo. We got in and no sign of him so I told organisers if it was o.k. for us to carry on and to keep an eye out for him they said this was fine. We dropped the bikes off and had to do a quick task a blind walk. I was blindfolded and ciaran had to lead me around a maze by calling out directions to the checkpoint and back. Good craic with everyone at city hall watching.

Adventure loop 2: We left cityhall on the Bikes and out across Albert bridge and up the ravenhill road to the ozone leisure center. As we turned into the grounds we were reunited with Americo who informed us he had followed a different group who decided to cut out the airport section 10miles in total. He thought everyone was going this way but we had stuck to the full loop. We dropped the bikes off and headed for the kayak section. Myself and Americo Kayaked down the (stinking) lagan to queens bridge then back up again. Roughly 2 miles but tough enough going for us as Americo hadn’t kayaked before and my legs started to get sore from pushing it on the time trail. We crossed the road again into the leisure center grounds for a few tasks. First was the space hoppers these were really painful on the already weakening legs. We had to bounce all the way around a pitch that had a circuit marked out for us. 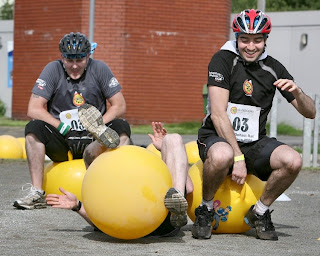 Then we got roped together and blindfolded this was the blind leading the blind task. We had to follow a rope around a tree section up and down hills with branches hitting us etc good craic. We headed back to the bikes to do the BMX track task which was three times around the track. As I approached my legs locked and I took the worst cramps ever I was in a lot of pain but took an energy gel and done a bit of stretching. Thankfully the legs started to work again and we went into the leisure centre. A tennis and basketball task which was score three hoops and get three tennis balls into the box at the other side of the net. We got back onto the bikes and followed the lagan down the tow path past cutters wharf to Belvoir forest for the rope section.

Rope Work: There was a big back log of teams waiting to do this so we got timed out and harnessed up. I took the break to change my blister patch and a nice clean dry pair of socks. When it was our turn we had to Climb a tree using a ladder and a roped section. The tree was massive and after a tough climb we done a zip line between trees then had to abseil down out of the tree. Americo being scared of heights done really well after a bit of tree hugging and a constant reassurance from the marshal he was hooked onto the rope. It was good craic a bit of a short rope section but good all the same. We got timed back in and hit the bikes again to shaws bridge.

Shaws Bridge Water Tasks: They had a massive slippery mat laid out down a slope and we were told we had to slide down it with out stopping. They had buckets of water to soak us on the way down. So much for my nice dry socks think they lasted all of 15mins. Ciaran went so fast down this he nearly ended up in the lagan. Then we went up the river for another kayak challenge and a tubing the rapids task. Americo went to do the rapids and Ciaran and myself had to do the kayak. In the kayak we had only one paddle so it was good craic trying to keep it straight. Ciaran paddled up to the check point and I paddled back. At the same time Americo had went down the rapids on the tube. We got the bikes again and cycled back to Belfast city center. We were too late for the mean streets checkpoints so took the time penalty and headed to do the last few tasks in the cityhall grounds.

Finish Line Tasks: I done a bungee run which was easy enough just sticking a bean bag to the end of a run. Then we headed for the slippery wall. We had to get the team to the top without taking a run up or using ropes. I lay against it and Ciaran hopped on my shoulders and climbed up he hooked his feet onto the bar at the back and I then used him to climb up to the top. Americo still hadn’t made it back but as we got down the wall he appeared and we all crossed the finish line. There was some champ waiting for us that never tasted better. We all headed home to get a well deserved shower then out to McHugh’s for the prize giving and a good nights craic although everyone faded early it was still a good night. That was the Belfast Rat Race 2008. Roll on next year for a bigger better Rat Race.
Posted by Michael Regan at 11:30 No comments: