It was a cold but dry morning. Head quarters was at the ballyholme Yacht Club in Bangor. We had the usual kit check and registration. Ivan event director was ill at home so Steve had taken over and give us the race biefing. Paul McArthur had planned this route so he went over a few of the more finer details.

After the race brief we took our bikes and cycled around the coast path to the Transition area at ballyholme bay. The bus took us out to the start point which was a bit further round the coast. We got a warning about roads being very icey and to be careful on the bike section then it was time to go. We had bib number one so we would be first team of the line.
We got our maps and started with a 8.5km Run along the coast. This was a really nice single track coastal path. We had a few check points to collect along the way. We kept a steady pace and let some of the faster teams past. This was something that I think helped us later with positon at transistion. When we reached Groomsport there was an optional checkpoint which we went for. This was the first time I felt just how slippy the roads and paths were. In the roads that had no sun it was very slippy. After groomsport it was another coastal run back to the beach at ballyholme bay. We could see the activity on the beach meant a special task.
Task 1 Stepping Stones
We had three wooden blocks and had to use them like stepping stones picking up the last one to complete our task. A good bit of balance and team work we done this with no trouble.
Kayak 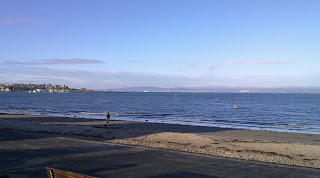 Earlier we had let teams pass us and this is were it helped. First 14 teams had to take the bikes while the next lot had the kayak stage first. We found getting kayaking out of the way first while we were still fresh helped. With a combined weight of 29 stone it takes a lot to get our boat through the water. We left the beach and paddled out across the bay to the Yacht club getting our punch card stamp on the slip way. Then it was a paddle back across the bay to the bike transistion.
Bikes
We took some water and food on then it was onto the bikes. My gloves and feet were wet so getting onto the bike made for a cold pedal. We had a series of check points to collect with the first of these being in housing developments or parks within Bangor. Andys great map reading made this a breeze. A team in front of us came up to a corner and crashed hard on the ice. It was very slippy on both the road and paths. We asked if the guy was ok and he said he was ok to carry on. Not long after this I done the same. I got my leg down to stop me falling but it started to slide too. After a few yards sideways I just dropped the bike and went down. I gathered it up and on we went traveling on country lanes out of Bangor. We arrived at a check point and had to do a special task.
Task 2 Horse Shoe Poles
We had to take horse shoes and throw them at the poles getting them to land on the pole. I done this with my second attempt and on we went.
Optional run
The next part was a run with two check points. We headed of and ran around the lake on very muck trails. Check points collected no problems. On the way back to the bikes we were stopped by a member of the public who told us the lake and the land was being sold and there was a meeting to save this area so it would remain a public right of way. Was this a special task? Did we have to remember the details. I said I would spread the word trying to keep moving as we were racing. Did this guy not know that??
Back on the bikes and we took the same route as the outward journey. We then turned right that took in a small section of single track. I got a bit over excited riding this part through puddles as fast as I could. When we got to the end of the trail I looked like I was mud wrestling. Good fun though. We got a check point then it was a fast pedal back to the transition area.
Task 3 Sand Castles
For this task we were given a bucket and spade and told to make a sand castle fort. I grabed a bucket and using my hands filled it and made the castles while Andy made the walls. Quick and easy it was back up and onto the bikes for more check points.
Back onto the bikes we had to visit the Marina pier and other check points located in Bangor town centre. Again Andys great map reading made this very easy as he shouted directions I just had to think about pedalling. We arrived at the car park for a special task.
Task 4 Word Search
This was an easy word search which we had done in no time at all. 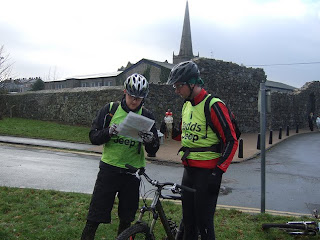 Bike orienteering
When we finished the word search we were issued with maps and a punch card. We had a number of check points to locate around a park area. This was slightly more tricky getting use to the scale of the map and on our second checkpoint it took us a few minutes to find it. Despite us being in the right place it was higher on a fence and of course we were looking low. The others we got with no real trouble and it was back to the car park to hand in our punch cards. We left the car park and traveled along the road to the next section.
Foot Orienteering
We got to the car park and were issued with maps and headed of into the park. Andy again calling the directions while I ran and got the check points. This was a nice run and give me time to get my feet and hands warmed again. We finished this section getting all the check points.
Optional Bike loop
We were both feeling good and pedalled on fast around this section. Andy calling some great short cuts and spotting dead ends meant we made a lot of time on this while other teams seemed to loose a lot of time. After finishing the optional bike loop we had just two more check points to pick up. One was back to Ward park were I have to admit I slipped up. After letting a lady past I pedaled on into the park. When Andy hadnt come behind me I thought it was him being friendly talking to the elderly woman. When I went back to check he was ok he pointed to the check point which I had past. He was just waiting on me and I was waiting on him. We got the check point and went to the next one. This checkpoint was on a fence on a pump station and quite high so Andy give me a footy up and then it was a dash back to the finish line at the yacht club.
We finished in 8th on the time but after speaking to a few teams who had finished it seems they had missed some of the optional stages so we are hoping our offical position is higher. But even getting 8th we were both delighted. 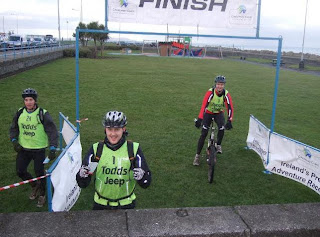 Official Result: 7th NICE ONE!!!
A great course from Paul and as always a big thanks to all the Marshalls and CCAR crew for another very enjoyable event. Get well soon Ivan. See you all at the next one.

Race Photos Here
Posted by Michael Regan at 09:18 No comments: