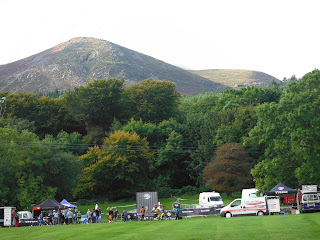 Donard forest park in Newcastle Co. Down played host to the final round of what has been an epic Enduro Series. Donard is somewhere I rode in the past but hadn't been back in recent years.  It was good to get back down riding here again.  Set on the side of Slieve Donard, the park rises up the side of the steep mountain.  The trails here are awesome, steep, loamy and technical.  I got down early to avoid traffic. I had a nice fry in Nikkis at the entrance to the forest park (Breakfast of Athletes) 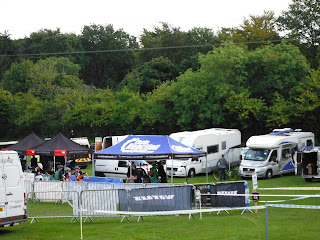 Stage 1
Sign on and chip on the wrist we rode through scrutineering.  Bikes checked and up the hill to climb to the mast.  At the mast we rode up to the rocky out crop and got set.  We set of down the side of the mast and straight away we were into slippy conditions.  I had changed the front tyre to a WTB warden and was already glad I did.  Steep, off camber, roots, rocks and muck.  Stage 1 is always a nervy one for me.  Trying to get into it without over cooking things.  Feeling the front end grip on tight corners give me a bit of confidence so I picked up the pace.  Still riding very safe I made a few mistakes riding off line or too hot into corners.  Thankfully no big moments just too many small errors.  When the rest of the crew got down it was similar stories.  We had two go OTB (Over the Bars) on the finish line drop.  Best move of the day was for Brendan, mid roll diving for the line to ensure his time finished mid crash.  Thankfully Brendan landed on a soft spot and lived to tell the tale.  We had a long transition around the side of the hill to the quarry following fireroads as we went. 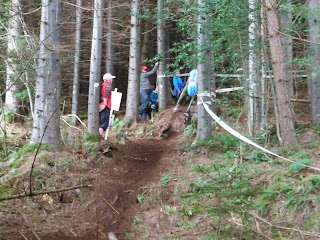 Stage 2
At the trig point on the quarry we got a good view of the start of stage 2.  Jimmy had a big moment in practise here and this had people taking a good look before lining up to start.  A steep start on rocky shale with a tricky section of rocks before rocketing into the forest.  The surface was soft in places but with every corner covered in roots it was a case of using trees or stumps to bounce off to get around corners.  I got caught out on a number of sections following the line of the trail but missing a turn.  The bridge was one of these sections.  I was pre-warned about it but just missed the turn until it was too late.  Another new section to me climbed up into the hill with a series of dips and turns before falling back across to the finish.  A very slow section for me again and any gains I might have made initially was lost along here. We had another long transition to stage 3.  A big climb finishing with a long climb on foot through the trees. 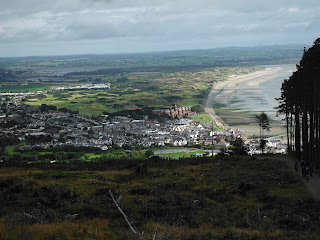 Stage 3
This was a great stage starting with a tricky rocky section.  Followed by tight twisty soft loamy surface.  The corners had grip if you pushed hard into them.   We crossed trough the wall for a flat out open section. Turning into a freshly cut trail which lead us to the first fireroad crossing.  There was a drop off the road into the soft grassy section.  Most were rolling this as there was a slight kink after the drop.  The stage flattened out with a long section that had the legs burning.  Back into the trees and the stage tightened up again.  More sections that lead off the main trail and not looking ahead caught me out a fair few times on this stage again.  The lower section I hadn't ridden so things came up very fast.  I was loose and ragged but thankfully stayed on.  A final bombhole with a corner from hell.  Roots everywhere I hopped straight trying not to turn on the roots.  This then ran me wide and to a stop back onto the pedals and I dived between two trees.  Both bars caught but my momentum carried me through unscathed.  The finish of another spectacular stage.  Back up the climb and across to the mast.  There was lot of climbing in a short area but something I was coping with.  Fresh legs from no Saturday practise probably helped a lot. 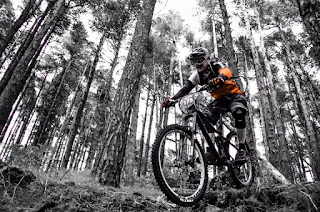 Photo: https://www.facebook.com/caolanhawkinshawkinsphotography
Stage 4
Starting from the same point as stage 1 but tracking around the opposite side of the hill.  I had rode some of this stage before so knew it would be a tricky one.  Some very fast steep sections with the dreaded off camber rooted lines.  I started this stage very fast.  On the limit in places but feeling good.  I got crossed up on one section and it took all flow out of my riding.  Trying to get clipped in again then when getting clipped in having to clip out that side for a corner.  I was just getting the pace again when the trail rose up killing all momentum and wrong gear had me ground to a halt almost.  A sketchy section took us across the fireroad into a steep slippy trail.  Very fast but thankfully I knew about a corner at the end of a big straight so I was well slowed for it.  Another stage done and back up the climb for the last walk to stage 5.  On the trek up to stage 5 the atmosphere was great.  Everyone had stories of near misses or crashes.  You could sense everyone was enjoying it but glad to be on the final stage. 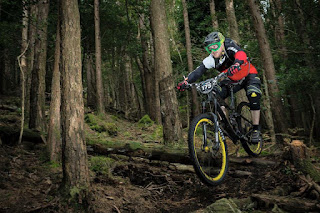 Photo: www.industryimage.com
Stage 5
The longest stage of the day had a bit of everything.  You could nearly say a perfect enduro stage if you where as Enduro as us.  With a long stage I had planned to take it easy at the start.  After the first few corners the trail started to flow and I was hard on the gas.  A trail like this drives you on and all plans of taking it easy went out the window.  Flat out along the first section through the wall and hard on the pedals for the rush down to the crossing.  I jumped off the fireroad and tried to keep the pace through the next bit.  It was very cut up and rutted.  Catching pedals and clipping in and out like my feet thought I was in River dance.  Rocky drops jumps and small gaps.  If I wasn't dropping off them I was catching a back wheel.  Some sections I had rode fast other days, I was very slow and making mistakes.  Getting tired and the slower pace always seems to make things worse.  There was another couple of moments of bad line choice before dropping back down into the finish area.  Across the line to finish 26th in my class and a top 100 place overall. 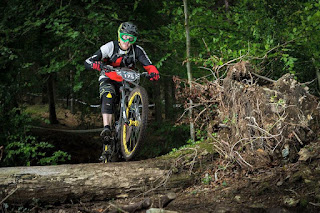 Photo: www.industryimage.com
I was happy to come away with no major crashes. I had a great day on the bike and the first major race season done and dusted.  It was great riding with the klunkers, meeting new friends along the way and having a laugh. The Vitus First Tracks Enduro Cup series in its first year has been Fantastic.  Massive thanks to Glyn, Cato and the mighty team behind them.


All eyes look towards Rostrevor in two weeks time.  Two times world Champion Gee Atherton comes across to try his luck against us ejits.  He is going to need all the luck in the world.

Posted by Michael Regan at 13:23 No comments: