It was our first race back after a long lay off. We had planned to do the full series but illness and other things out of our control meant we missed the first two rounds. Heading to Groomsport with no goal or targets we just wanted to filter back into the racing and enjoy. 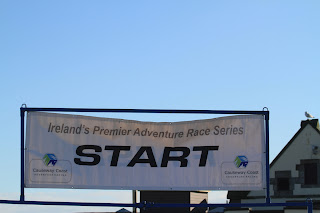 The weather was perfect for racing. Clear blue skies dry under foot and a nice chill in the air to keep us cool. The race format was slightly different to other races we have done. The race would be a points based race with a 5 hour cut off time (failure to return within the 5 hours meant point deductions) something to think about while out on the course. 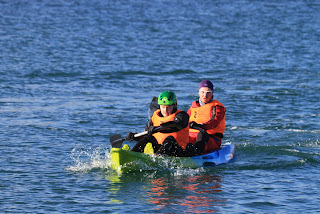 We would start in Groomsport harbor with a very short Kayak leg across the bay and back. I think this was the shortest ever kayak leg and I heard no complaints from anyone. We jumped into the boats dibbed and got the heads down to paddle across the bay to the checkpoint. Strong paddling meant we passed 4 boats on the way out passing one more just before the checkpoint. Unfortunately we give them a bit of room and they nipped in front of us to dib before us. Once dibbed we got the head down again for the return leg passing another 3 boats. Out of the boats and it was out onto the first run section. 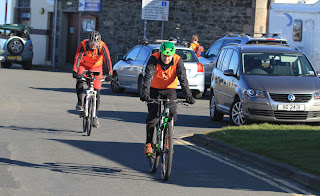 Google maps orienteering through the village of groomsport.
We had a number of checkpoints to pick up in any order. We had no issues with this fairly simple navigation section. Others seemed to use the out of bounds field to buy a bit of time but we stuck to the course and cleared this section returning to the boat house for a brain teaser. Andy made a lightening start and was filling in answers before I even got looking at the sheet. Once I got my head around it I got a couple of answers clearing all but 3 of the clues. I think we ended up getting 16 correct. On leaving the boat house we ran back to the harbor wall to collect the bikes. 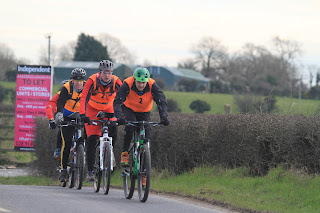 The bike route had a number of mandatory check points and some optional bonus checkpoints. Straight away we went for some of the bonus checkpoints. Two of these where used in the last Bangor race so it was ground we knew fairly well. One of which was at a reservoir with a wooded section. On arriving to the gates Andy said it is just off the road so we left the bikes and headed in on foot. After initially thinking we were at the correct bridge a quick look at the map we realised it was further into the wood. Thankfully we hadn’t wasted too much time. We should really have taken the bikes in and made up a bit of time as other teams had done. Thankfully we weren’t the only team to read the map wrong at this point. There was a large group of teams took a long time searching for the checkpoint at the first bridge loosing a lot of time. We got back onto the bikes and blasted around the course picking up some bonus and the mandatory check points. The 62 Cycles Carbon 29er was the perfect tool for a race like this. Such a light frame we could really hammer along the bike stages. With this in mind we decided to try to get as many bonus checkpoints as we could while on the bike. 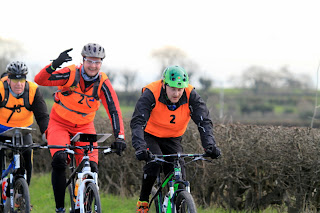 At this stage there was a good group bunched together. Faster teams having picked up bonus checkpoints joining slower teams on the mandatory course. Crossing some major roads we climbed up into the leadmines. The lead mines looks like a bit of a maze but to be honest it was pretty straight forward. The chimney was the biggest structure in the mines. So disregarding the zigzagged paths I took the direct route. Straight up the side of the quarry. Again leaving the quarry was as hard as you wanted to make it. I took to higher ground so we could have a look down towards Newtonards. Some people let the trails confuse them but looking at a map and straight lining out was how we done it. Having stopped at the gates for the checkpoint we decided to push further out for an optional checkpoint. We knew this would involved a big climb out the Belfast road but on the bikes is where we believed we could make the best use of our time. We were a bit slower than we hoped along this section but it was extra points. The route made great use of any off road areas and one check point was in a small wood that was really nice to pedal through. Back onto the roads and we followed the maps to the Transition area at Cairnwood.

Foot Orienteering Cairnwood
The foot section had two mandatory check points and three optional. Andy wasn’t in the form for running so we decided to go for the two mandatory and one optional on the way back to transition. We jogged/walked this section and found the checkpoints with a bit of compass and map reading. No issues we arrived back to transition for a special task. We had three horse shoes each and had to throw them at metal poles. Hit the poles for the points simple. More easy points in the bag for us.


Back onto the road the next section was a really nice addition to the course. We followed the ulsterway along a series of tracks and trails through wooded areas and fields. It was really nice to get off the roads and onto the tracks. The bonus checkpoint here seemed to be the most direct route anyway and on terrain like this it would have been rude not to go for it. After picking up the bonus checkpoint there was a really nice single track through a wood leading out onto the crawfordsburn road. Turning left we pedaled hard into the village. A checkpoint that had us run under the railway tracks again seemed to confuse some people as we seen teams ride past the station. Looking at our time we pushed hard to the next transition. This was an optional run. Again looking at how long it would take use to complete this versus the remainder of the course we skipped it all together. Back on the bikes pushing hard to pick up the remaining mandatory checkpoints.

We got to transition and with the time we had we done the special task. This tested team work. We had to walk on planks that we would lift with ropes. Moving our feet together in a left right motion. Walking around a slalom course we done this first go without putting our feet down. Another easy 20 points in the bag.

Looking at the time we had left and the size of the course we decided to cut out the Bangor run. This was an optional run through the streets. The bike sections where our strong point and we thought we had enough time to clear almost the entire bike loop. Pushing hard around the first three check points it became apparent that we wouldn’t have time for the full course as two of the checkpoints where way out of our way. We had said from the start we wanted to finish inside the time. With this in mind we took the ring road around bangor and headed straight for groomsport. We crossed the line on 4 hours 48mins. As we where one of the first teams back we went straight into first place. I expected that position to drop rapidly as more teams arrived. It wasn’t long before we dropped to second and then third. With more and more teams arriving in and dropping below us we started to wonder had our plan worked? I knew good time management could help us do well but didn’t think just as well we had done considering how unfit the pair of us where. 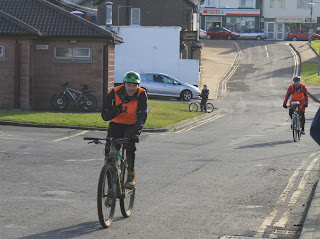 We dropped down one more place into 4th with multiple CCAR series champions Billy and Gerry piping us to a podium finish. We were both delighted with the result our highest race finish yet. Not necessarily our fastest or best race yet but definitely one of our smartest.

We have got the bug back and ready for the next one.

Paul McArthur did an amazing job yet again on the course. Having already planned courses in this area Paul was still able to make this one totally deferent to the previous. The additional bike sections and off road trails really helped make this race. The fact that such a big course was used really meant you had to think. Time management and planning really helped us. 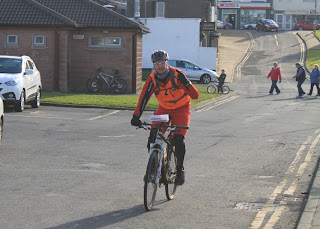 Big thanks as always to the CCAR crew for the great race and pre race banter. 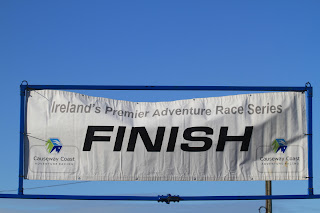 Posted by Michael Regan at 04:15 No comments:

Davagh forest is my local forest and probably the forest in which I really started my love of Mountain biking.

The forest is situated in the Sperrin mountains close to Draperstown. For years Mountain bikers helped maintain a network of old walking trails that had fallen into disrepair through lack of maintenance and no use from walkers. As the trails were forgotten mountain bikers created a small series of trails to ride. For years locals campaigned to try and get some help from forestry service to help build trails. For years the forestry service dismissed any notion that they would ever create mountain bike trails.

This would all change with the help of Cookstown Council, Outdoor Recreation NI (Formerly CAAN)local representatives and the NI Mountain Biking Association. Years of talks, planning, let downs, highs and lows finally have paid off in 2012/13. Outdoor Recreation NI created the frame work in which Architrail would design the trail network. Planning permission was agreed, Forestry service would allow Cookstown Council control over the trail network and Local contractors FP McCann would create the trails.

Building work on the trails is into the last few months. The Marketing team from Outdoor Recreation Northern Ireland are now finalizing their marketing strategy for Davagh, Castlewellan and Rostrevor Mountain Bike Trail Centers.

I was asked if I would come along to Davagh on a photo shoot. The marketing team needed some Mountain bike photos and I was delighted to help out. We spent the day on the new trails and what a day it turned out. The trail network is fantastic. 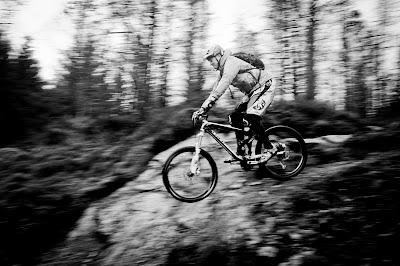 Photos by:  www.tonypleavin.com
http://www.tonypleavin.com/2013/02/more-mountain-bike-madness/
The standard of trails in Davagh are on par with anything I have ridden in Scotland. It is a trail that doesn't leave you wanting. Perhaps a bit short at the minute but that leaves room for improvement. This will definitely be a big boost for the local economy. 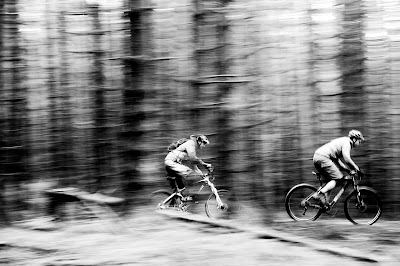 The trail designers Architrail and FP McCann have done a brilliant job. I will admit I was a bit skeptical when I heard who got the build contract mainly because this was the first time they produced trails like this. It would transpire that I had no need to worry because under the management of Phil Saxena of Architrail and his team they have really pulled it off.  Lets face it unless they brought in build teams from outside NI no one here had the experience. It was great for the economy that the local business got the contract and had the ability to deliver a top class finish. Now they have the experience and the knowledge they can deliver more projects like this if and when funding is available. I am pretty confident you will see a massive boost to the area in this rapidly growing sport/hobby/lifestyle.

I am really looking forward to the trails officially opening.

Well done to all involved and hopefully this is just the beginning.
Posted by Michael Regan at 13:16 No comments: