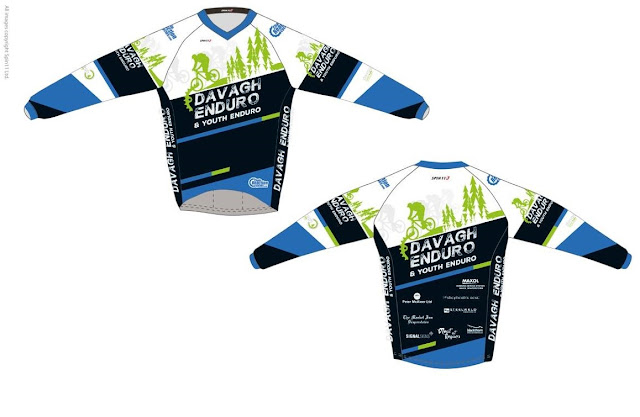 Posted by Michael Regan at 12:57 No comments:

With two rounds down the Vitus FirstTracks enduro cup rolled into Rostrevor. Rostrevor is known for its steep technical terrain. Glyn and his team used the best of this to test us sometimes to our limits. This round really did take it to the next level. 5 stages with three being natural Downhill trails and two trail centre trails. A course that would see us riding 17 miles with just under 4000ft of elevation gain.

Race village was set up in the Mountain bikers car park in the Kilbroney park. Vitus Bikes gazebos housed the Chain Reaction Cycles Mechanics and the sientries timing system. Sign on was quick and with my time already allocated. I was free to get the bike ready and join the rest of my riding crew for the day the klunkers guild. 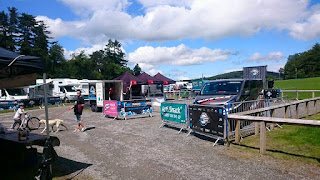 We rolled out of the car park together with a beep from the start beacon. Heads down for a long drag up the infamous lung buster. Many choose to walk this and save the legs. Worse was to come when we past the Downhill trails. We took a left up into the walking trails that zigzagged up the steep face of slievemartin. Looking across to the red trail I thought it may have been easier riding the long way round. The calves took a stretching on this steep push up track. We walked up through the tree line into a mist covered mountain side joining the red trail. We saddled up for the short transition across the red to the top of Stage 1. 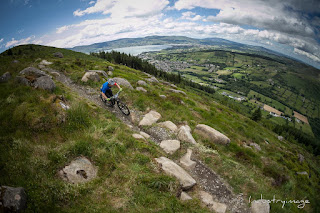 Stage 1 Boulderdash Black trail
After a good warm up getting to stage 1 we started on the mild boulderdash. We had a tough days riding ahead of us. One unlucky rider hadn't even made it to stage 1. Crashing hard on the transition, pulling out with suspected broken collar bone. This stage was trail centre grade surface with off camber open rock sections. Visibility was poor with a low hanging mist and a light drizzle of rain. I took it easy on the first few corners to get the legs working. After a few small rocky drops I got on the pedals. I pushed hard on a trail I knew fairly well. I had one moment on a rocky corner going straight on and loosing some time getting back on the track. With the first section nearly complete, I spotted the familiar figure of Warren McConnaughie of Industry Image photography. I give him a shout and set up for the wee rock drop. 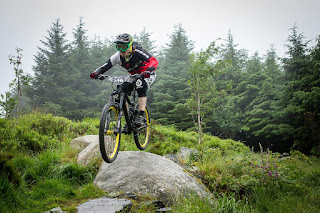 We crossed the fire road and back onto the Black section. This part was hard to get flow going due to the design of the trail. Drops with landings on corners or rocks protruding onto the track. One caught my foot and had me off into the trees at speed. I gathered myself and got moving again, pedalling hard to the finish. We had another steep transition to stage 2. 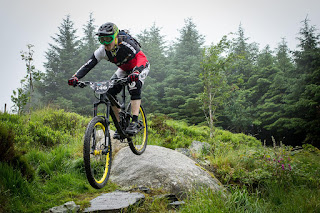 Stage 2 Yellow water Downhill track
Now the fun really began with this full on track. I hadn't ridden this in practice so it was a case of trying to look well ahead and not make any silly mistakes. We started rolling down the hill and across the ford on yellow water river. There was a slight climb after the river, continuing with a fast descent then hard on the brakes. Turning into yellow water dh track already there was steep drops and roots at every turn. The track isn't overly steep but one you had to be on your game on. A big drop to the side of the track made you want to stay on course. We had multiple line choices over drops, around tree stumps and rocks spread throughout the tree lined trail. We skirted the banks of the river until reaching the finish just above yellow water picnic area. The transition to stage 3 was straight up the steep forest road climb which ran parallel to the track of stage 2. Another tough climb in the legs. As we reached the turn off for stage 3 we shouted words of encouragement to other riders on there way into the yellow water track. 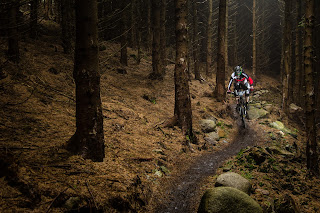 Stage 3 Yellow Water Black
This stage was a return to trail centre grade trail. The first section was fast but tight. No major corners but trying to keep the pace up was hard due to the tight nature of the trees and rocks. The trail climbed slightly before a road crossing and the legs already felt the burn. We travelled across a rough section of rock garden slabs. Then a tight turn joining the red trail for a flat out sprint. I tried to keep the pace high tipping the bars on the slight kinks on the trail. Flicking and turning the bike trying to
dodge the rocks lined along the side. There were a few bum tightened moments when the toe clipped but thankfully it was only a slight brushing. A long transition followed the ulster way back towards Kilbroney. We picked up the horse track used for the cross country race climb and rode this back onto the lung buster. Another tight climb up to the start of stage 4. 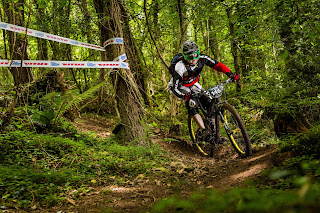 Stage 4 Red, NPS, Caravan Return
We started on the red trail centre link up. A flat trail meandering across the forest. The tame nature of this trail soon made way to a steep technical roller coaster ride. I made the mistake of slowing to turn in where I thought the trail went. I then spotted the tape and realised I was on the wrong line and rejoined. I then pushed a bit too hard into the first steep section. Warren was on hand to capture me blasting through this section getting crossed up and having to dab the foot around a tight corner. 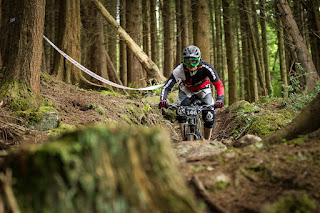 Trying to get going again the bike bounced across roots and rocks. I was finding it hard to get the flow going and the track was ridding me. I was out of control but trying to keep the pace. At the fire road crossings I always tried to ease up to save a silly crash. Not looking ahead I nearly missed the turn back into the trail. With I tight turn I rejoined and dropped into the steep section. Rattling through a series of smoother turns I felt I could get a few pedal strokes in. I seen a gully in front. I had one eye on it and one eye on the tape lined trees I thought I would huck across. It was only on landing and falling away from the trail, I realised the tape had been broken and the trail turned left at that point. I scrambled back up the steep bank and hopped on the bike. Bouncing down the next section I really was all over the place. I heard Wayne calling out for a pound of sausages and had a good laugh still trying to concentrate on were I was going. 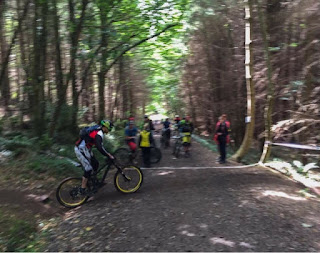 I crossed the fire road and as the trail smoothed out into trail centre grade I got on the pedals. This section felt like a tarmac road after the pounding I had taken above. One stage to go and one big climb to get there passing the start of stage 4. 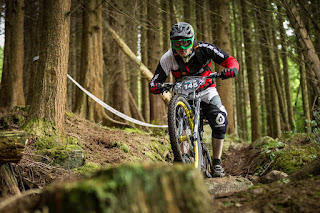 Stage 5 DH3
I had previously ridden part of this so in some way knew what was to come. In racing scenario that all went out the window. A rodeo ride lay ahead on this tight twisty steep track. Over the back of the bike and with only a couple of pedal strokes I was already hurtling through the stage. Clipping the feet and pedals and dabbing the feet on many corners. One section I was bouncing on the back wheel. Every time I tried to get moving I hit a rock or unclipped. 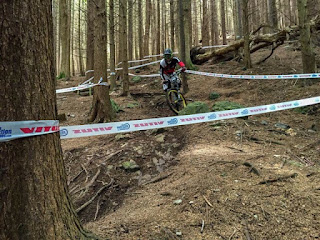 I was still moving though and despite the terrible ridding enjoying the stage. A couple of dismounts and remounts, fire road crossings and crowd lined sections I tried to push on the smoother bottom section. This stage really give me a kicking but hearing the beep of the final stage beacon I sat back and rolled to a stop on the fire road. 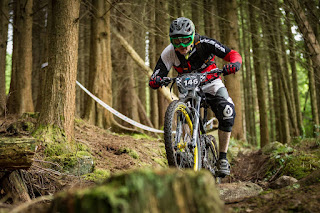 The series was always advertised as getting progressively more difficult. This really was a step up but a good step up. I didn't ride well but I enjoyed it and that is my goal in this series. 21st in my category of Masters B and 97th overall.

Donard Forest is the Location for Round 4 entries are still ope: https://www.sientries.co.uk/event.php?event_id=1708

Photos By Industry Image Photograph:  http://www.industryimage.com/portfolio387688.html
Posted by Michael Regan at 06:37 No comments: