Team Eire-Cat got an invite to a mini Duathlon held by the triangle triathlon club. Sunday 22nd November 2009. We took the hour and a half drive up to Cam forest. Conditions were not great. Heavy Rain and a cold wind was to get worse as the day went on. I got the bikes ready an took a ride out into the forest roads. Just out of the car park was a very steep climb. Was this the route we would take? I would find out soon enough. I spoke to a few friends that had arrived and they confirmed my suspicions that the hill was the start of the route. Not knowing the forest which was all new to me. Sometimes this can be a good thing. Peter Jack organiser briefed us on the route for today’s event. The course was a 2 mile loop all Left turns. We would do run the first lap bike 4 laps then run the last lap. The junctions were well marked and a warning of slow painted just before a tight corner. With everyone warmed up (Yeah Right in this weather) The race was about to begin. Peter give a warm welcome to Marga and introduced her as an international racer from Barcelona (Go Marga) 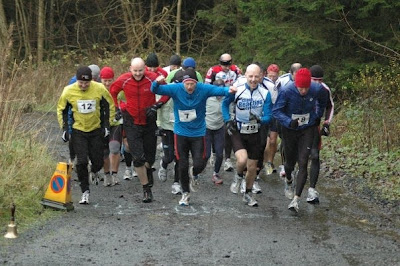 The Race
The race starts and we are off into the forest and up the hill. I picked up the front group and we got into a steady pace with a group of 5 of us. The hill started very steep on a gravel forest road. We continued to climb but the hill wasn’t as steep at this point. As we reached the top of the hill we got a shock with the wind. This part of the forest had been harvested and was very open. On what should have been a nice flat fast part we had to work hard into a strong head wind. The group started to open up at this point and everyone was on there own. I tried to keep a steady pace a take this as a sighting lap to see what was to come. First left turn and down hill. Just in time to get the breathing working again and pick up the pace. At this point the biking line was coming into my head. Stay right of the corner then stay left on the road down the hill. We continued down the hill towards the next turn and with a large white Slow painted on the road to warn us of the tight corner. I tried to take in track conditions and a good line for the bike. This was an off camber corner and mucky to the inside. As we turned the corner there was another climb. This wasn’t very steep but dragged on a bit. Over the top and a fast downhill with a left hand turn just before a stream crossing. As this was the first lap I wanted to try keep the feet dry so I jumped the stream making it to the other side. Another left turn and up hill back to the transition area. 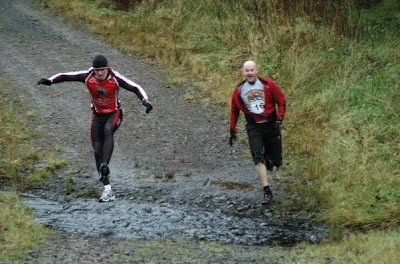 Lap Two and time for the bikes
Helmet on and onto the climb again. I had the saddle set perfect nice and high to get full use of the legs. I pushed it on the climb knowing the windy open section would be slow. Head down and into a tuck to pedal hard along the flat and out of the wind. Turned the corner and onto the decent. This is were I hoped to make time. I pushed hard pedaling and picking my way down the hill. It wasn’t anything technical just rough some big holes. Coming up to the corner I tapped the brakes but kept the speed up. Leg out the side and around the corner getting a bit sideways but still in control. (I loved that corner) Last climb long and slow getting to the top I picked up the speed again. Pedaling hard down the hill pushing around the corner and towards the stream crossing. The photographers were out in force on this part hoping to get someone taking a swim (As if we weren’t wet enough) I didn’t brake instead I wheelie through and kept the speed going on the hill on the other side. Around the corner and back across the line. Already we had competitors dropping out through injury or mechanicals. 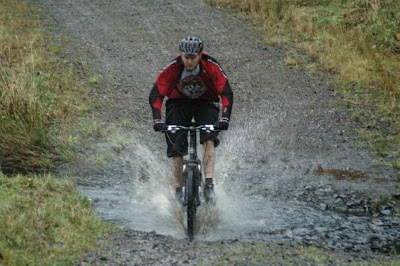 Lap Three
Much the same as lap two. Head down pushing hard battling through the wind and rain. 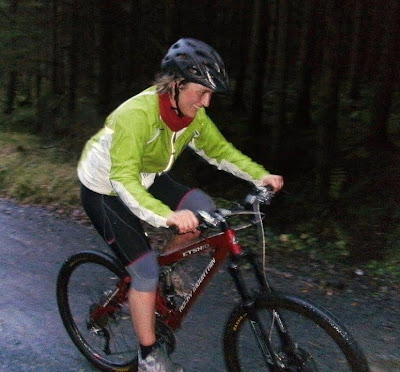 Lap Four
On the climb I rounded the corner to see Marga pedaling strong up the hill. It give me a real boost to see Marga pushing on well. A quick word of encouragement as I passed and I got the head down for the climb. First place rider now passing me on his final bike lap. Jonny Dempsey a machine on the bike was doing amazing.

Lap Five
I pushed on hard and on the last bike lap. I was well warmed up and this lap seemed to fly past. I seen someone in front of me and made them my target. Dropped the bike off I took my rain jacket gloves and helmet off to lighten the load. I didn’t want to leave the bike as I was enjoying the pedaling and getting stronger at this stage.

Last Lap
Into the climb and heard a few shouts of encouragement from the Chain Reaction Cycles Crew. (Cheers for that) A hard climb on tiring legs but the wind at the top made the flat even harder. I pushed hard on the descents and could see I was catching the competitor in front. On the climb the gap remained the same but on the decent I was closing it a bit. Next the river crossing and this was my time to pass. I wasn’t worrying about keeping the feet dry this time and ran straight through it. Passing and running hard up the hill to cross the finish line. Really pleased with how I done and really enjoyed the event. 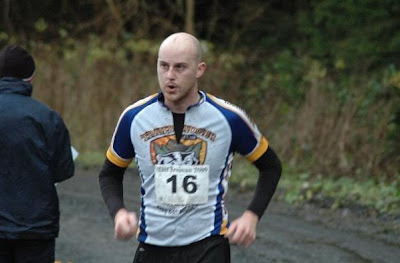 When I had a bit of a break I turned and ran the opposite way to give Marga a bit of encouragement on her last lap. It was great to see her running hard and in good spirits. Really good strong finish from Marga and happy to complete her first Duathlon in Ireland.

Hopefully I will have photos of the event uploaded soon.

This was just a warm up for next week. We are teaming up for the Causeway Coast Adventure race in the Glens of Antrim.

Thanks Marcal. We should pick a year and venue and everyone get training for it. I would like to try an olympic size triathlon some time.

haha!!!! the guy besdie you in the second pic looks like he's about to break out in an irish dance!!!! michael flately look out!!!!!