am alarm went off and I went for a continental breakfast. Alpen with milk to start. Toast and wheaten bread with marmalade. Washed down with orange juice. The weather was amazing clear blue skies and a light breeze. 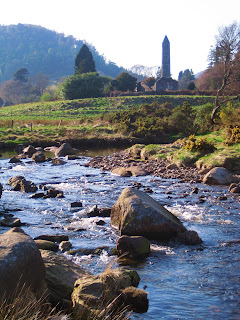 The setting for this race was amazing. Glendalough
(Irish: Gleann Dá Loch, meaning "Glen of Two Lakes") is a Glacial valley in the heart of Co Wicklow. Renowned for its early medieval monastic settlement founded in the 6th centure by St Kevin, a hermit Priest, and destroyed in 1398 by English troops. 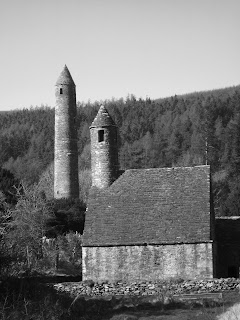 The upper lake car park was the starting point just a mile from the Glendalough Hotel where we stayed. I got my gear and we walked the mile up to the upper car park. Atmosphere was building and a cheer went up for the wave. I checked the bike and got ready on the start line for my 8:30 start wave. 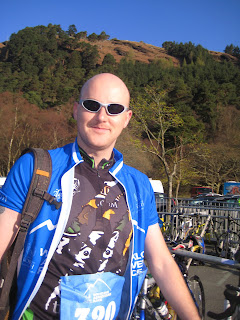 Run
Distance: 8.6km
Meters Climbed: 575m
We lined up and got a race briefing then got the call to start. Spink mountain run was first a brief start on a winding uphill path getting steeper the further up we climbed. We took a right turn and the steps started. An amazing path made from railway sleepers. Two laid side by side facing up the mountain. The run slowed and then stopped when we got into the steeper steps. With a full day of racing ahead walking fast rather than running the steps stopped burning out to soon. The steps went on for a long time but the craic was good and took our thoughts of the climb. When we emerged from the forest the views were stunning. This felt like the top but we still had a lot of work to do. Another steep climb of steps before the trail started to descend. Two Deer bounding across the mountain and skipped across the trail in front of us. They passed over the heather with speed and precision I could only dream of. If I could run like these deer the run would have been a lot easier. First check point and the railway sleepers made way for a rocky path. This twisted down the valley to the side of the lake. The rough path changed to a gravel track on the descent back to TA1. A quick change of shoes and on to the bike. 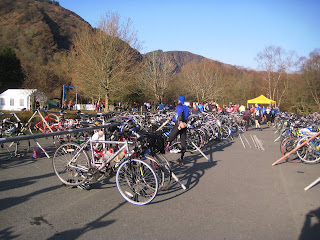 We cycled through Glendalough and Laragh. This was the first time on the road bike since august last year. What a difference it was to the mountain bike. Feet and knees close together and the pedalling felt so different. I just thought pedal and stop thinking about the lack of preparation. I got into a rhythm and was going well until a large white dog along the road jumped at me. I really thought he was going for my leg, a snap but thankfully no contact was made. I was thinking just how bad it would have been if the dog had got my leg. Thankfully no bite and I got a great feeling when I seen my partner Marga cheer me on from the next village. Even with this boost I could feel the legs tightening. I tried to get into a rhythm that prevented cramp at this early stage. The more I got on the toes the better I felt. We turned off the main busy road and started a climb on a rough country lane. I was joined on this part of the cycle by two lads Rob and Dave. I had remember chatting with Rob on the first climb and the company was welcomed. We pushed on then took a left for a welcoming descent to Lough Dan. I got into a tuck and resisted temptation to brake. It was the right choice as there wasn't any major corners. A very bumpy road but I enjoyed passing others a little less confident on the descents. I got to TA2 changed the shoes and made the short run to the Lough.
Kayak Lough Dan
Distance: 2km

Lifejacket on and ready to paddle. Only one problem there was no one else to pair up with. I could see others approach but they all where running in pairs and I was left waiting. A long wait watching others set off when eventually a fellow competitor grabbed the kayak and we were both out on the Lough. We got into a rhythm and paddled out around the first buoy. We got into a good rhythm and the paddle went by in a flash. On the run back to TA2 I got a water bottle filled. Was I drinking too much or too little I didn't know. I took a gel and hoped it would help.
Cycle to Lough viewing point. (CAT1 climb)
Distance: 8km
Meters climbed: 284m

I quickly changed the wet socks before I mounted the bike for the big climb back up the road I had such fun on descending. 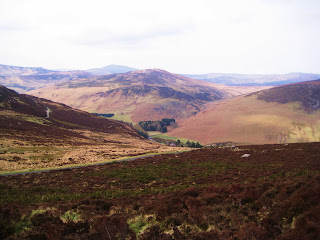 A long pull up the hill took it's toll on my legs. I took terrible cramp in my calves. I tried to ride it off but the fear of coming of the bike while in the spd's made me stop. I stretched and pulled my toes but every time I tried to step into the pedals I would cramp. I heard a voice behind Rob and Dave encouraging me onto the bike again and with a lot of effort I got back into the pedals. With cramping legs I battled on best I could. Eventually I caught up with the fellas and the chatting took my mind off the sore legs. Switching between water and powder lucozade sport bottles. I had made it before the start but the more of it I drank the worse my stomach felt. I stuck to the water from here on. The chatting stopped as we hit the CAT1 climb. As I started to climb my legs felt better the more I got on my toes. Perfect for climbing and a big relief for me. As I looked up I could see many competitors get off and walk. Cheesy as it sounds I thought of Lance Armstrong’s books. I got my head down and started passing the guys who opted to walk, to my shock I was also passing others pedalling. I topped the climb and kept pushing to TA3.
Run
Distance: 9.5km
Meters climbed: 450m

I changed into my trail shoes and started the run into ballinastoe wood. Cramp cramp cramp! I started to walk but a competitor passing spurred me on get up on the toes and run it off. It worked and slowly I got into a jog. A familiar voice behind was Barry the savage Sullivan a mate from work. Barry had started 15 mins behind me so was going really well to have made up this time. He passed me as I struggled to run. When I met Rob from earlier we ran together for a bit. I was looking around me more in this wood as it has single track mountain bike trails. I will be back some day I thought in less demanding circumstances. Out of the forest and onto djouce mountain climb. A trail took us up the mountain but with a steep incline I was back to walking pace. When we reached the top it was back to a swift jog. The railway sleepers showed the way and another amazing trail across the mountain. The trail was busy with walkers. I thanked anyone that stepped of the sleepers to make way for us. When I jumped off to pass others the ground was wet and I lost a shoe twice. Annoying thing was I wasn't getting the courtesy I was giving back. I choose to forget about people like this. I didn't have right of way and nor did they but it's not hard to say thanks. As we reached TA3 again I got a drink and changed shoes for the last time.
Cycle over Sally Gap to the Finish
Distance: 29km
Meters climbed: 114m
Meters descended: 438m

Onto the bike and pedalling hard downhill this was a very fast section. The road was a busy with tourists and other fellow cyclists. A sharp corner right and a sharp corner left I had chosen to take it not braking. First corner was fine knee out Rossi style. On the second corner right on the apex I saw a pothole. I swerved to avoid it but it took me very wide. Thankfully I was in control and missed the on coming car that was on my side of the road. The last big climb up to sallygap and the check point. It was nice to see a few cyclists that had passed us stop on the gap to cheer us over. 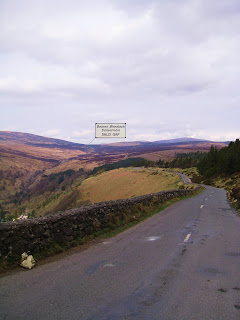 Someone told me it was all down hill from sally gap. This wasnt exactly true and pedalling hard I soon found that out. When I hit a small climb my legs started cramping. A guy who was passing shouted a few words of encouragement and I got on the toes to get rid of the cramp. Later up the road he was stopped. I shouted if he was ok and he said it was his chain and to keep going. As I looked back I saw him get back on the bike and pedalling hard to catch up. Turned out it was Ronan a friend of Barry’s. The road was mostly downhill with one really fast section. I was off the brakes all the way down. A few heart in mouth moments on loose gravel but I could feel the end was near. Seeing Laragh village was a welcome sight. The Garda and marshals give us a clear road at each junction waving us through. A familiar face on the road to home was Ken from the kayak. We both pedalled hard back through Glendalough talking about food the whole way. Into TA1 again racked the bike and ran to the line. Cheers and claps from people on the finish line was a nice way to finish.

Mad dogs, Cramps nor a CAT1 climb could stop me. What a day! 73 km in 05hours 18mins. Tired, sore but happy and delighted to finish strong.

Big Thanks to:
Paul and Brian for organising the event. The Marshalls and the Garda for keeping the biking safe and enjoyable. Also all the other competitors for the craic and banter that kept me going.

Thanks to Marga for coming down getting up early and cheering me on.

Excellent comments. 73 km in 05hours 18mins is a good job. Congratulatios for your gorgeous race. Ricardo