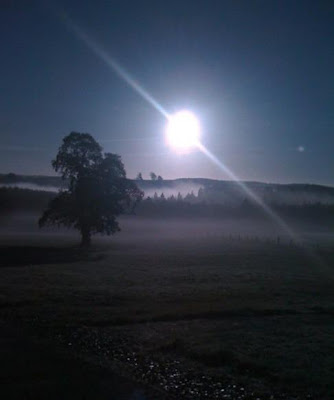 We left Belfast around 7am and headed south to Cootehill. The morning was beautiful blue sky and a nice fresh feel to the day. We arrived at Tanagh Outdoor centre and went for kit check and instructions on the course and the bike drop. A bit of time for a VERY light warm up. A warm up I don’t think you would find in a personal trainers guide book. I think it was more of a gentle sway from side to side. 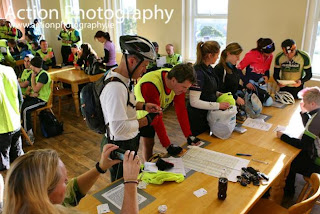 The Run:
We lined up and got ready for the start. Crossing the start control we got our first dibber checkpoint and were handed our maps. we jogged down the lane across the main road into a forest. The trail we followed was single track and very soft under foot. We tried to look at the map as we ran but then decided to take our time, find out where we were and take it from there. We looked at check point two and headed for it. When we arrived we realised with other faster teams only getting there now either we made a great navigational move or we had made an error. First mistake of the day and to be honest I think it was our only mistake all day. The dibber at the start control wasn’t checkpoint one this was just the clock starting. We took a closer look and spotted checkpoint one. I sprinted off meeting teams coming towards me who had obviously already been to the first control. I got to 1 and turned back picking up again at check point 2. We had a look at the map and the other points breezed by. 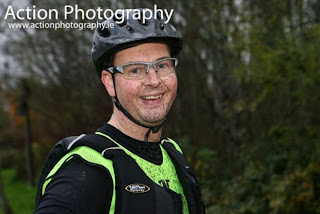 Andy having confessed to not being a runner was doing better than I had imagined and kept up a steady pace. A few stops to look at the map along the way give us a breather and we reached the kayak section. The first task and what a task it was. We were handed a packet of cream crackers and told to eat them all. This was tough going having just jogged about 5km. We wolfed them down us taking water to try help the dry crackers go down. Nice!!! Ironically I had been eating crackers and cheese the night before for the first time in a while. Think it will be the last cracker I have for a bit. 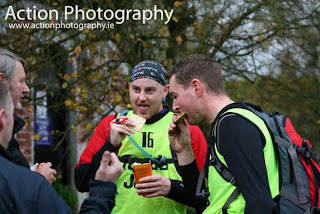 The remaining checkpoints were a return to the previous ones and back to the HQ. Task number two was an obstacle course. First was a water splash and a wall climb. Then it was into a tunnel that I just about fitted in let alone scramble to the other side. Andy is bigger than me so I can only imagine what it must have been like for him trying to squeeze through. Next was a rope climb and last a balance beam. 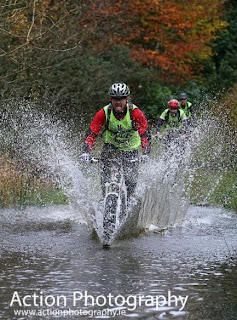 The bikes:
We got to transition and changed shoes for the bike section. We were feeling good and said we would go for the bonus loop. It took Andy a bit to get his legs going on the bike after the transition. After the first few checkpoints he was fine and pushing on well. I had made a map board from old light clamps and a place mat from the dinner table. This worked until the first checkpoint when we took the card off for the punch I bent the pins putting it back on. With nothing to hold the maps on it was map in hand and a waste of my unique map board. We over shot one junction but not by much turning back and finding the road we past. Two nice steep climbs in the middle really got the legs working. We joined the main bike loop at checkpoint 16 and could hear from other competitors that they hadn’t done the bonus loop. This was a bit of a confidence boost and helped us keep going at a good pace. The next section was back into the forest. The trails were mucky and sticky but with a generally flat course we managed to keep pedalling well. I could feel the front end loosing a bit of control and realised I had a flat. We were close to another check point so I continued pedalling to it. Andy went looking it as I changed the tube. Tyre pumped checkpoint got it was a race around the forest that was like a maze at times. Andy was great on the map reading and we had no problems finding all the checkpoints. A few were less obvious than others but with a bit of team work we found them all. Check point 26 and another special task. 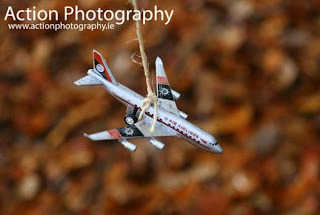 The Blind folded rope line:
We got the instructions which told us we would be blind folded and taken to a rope. We had to follow the rope to the end. On the rope at intervals was different objects we had to work out what they were from touch and then remember them to write down what we thought they were at the end. 1min penalty for each we didn’t get right. Lets see if I can remember them now. Hanger (I wont forget that now as we did on the task) Sunglasses, toy plane, sharpener, pine cone, hat, Mug, Fork, CD and ..... There always one I forget. This wasn’t easy with obstacles in our way in fallen trees branches etc. Then to try and remember the objects at the end. We got nine and handed our answers to Shirley and it was back on the bikes for another few checkpoints before the Kayak stage. 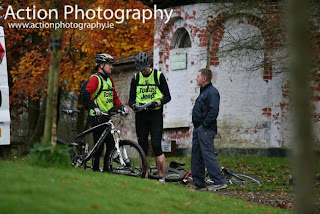 Kayak:
On arriving we had another task before the paddle. Fill a vertical pipe with water to get a ball out the top. The pipe had holes so as I held the holes Andy filled the water. Only took a few buckets and with Andy’s long arms we were off and into the Kayaks. 3km of paddling was really sore on the shoulders. This as I have said before is my weakest discipline in Adventure racing and one I really want to improve on the future. Having said that we managed to get into a decent enough rhythm and kept our heads down passing one team on the way to the checkpoint. We turned at the check point and headed back. We were like a well oiled cruise ship rather than a torpedo. We got there and had the worst over us before the rain started. Already very wet at this stage a spot of rain wasn’t going to bother us.

The final leg:
We hopped on the bikes after having a bit of banter with Steve. 4 more checkpoints to go and then the finish line. We had a bit of a road ride picking up a checkpoint at the gates to the forest. Then we were back into the forest for a bit of back tracking over ground we had already been on. Out to the furthest point in the course then one last push to HQ. The lane leading to the finish line was feeling quite steep having spent 5 hours on the course. I heard a shout behind me but with the head down I didn’t want to stop to the line. I turned to see Andy pushing the bike. He had snapped his chain on a gear change. Thankfully this was at the end rather than the middle of the course. The final dibber and Race 1 complete.

Thanks to CCAR for another great event and all the Marshals and helpers for making everything go smooth apart from the crackers down our throats ;-)

Also thanks to Action photography for covering the event. www.actionphotography.ie