After the gale force winds on Friday it was great to waken up to a calm mild morning all be it slightly over cast. HQ was in the Gransha Hospital grounds. The usual kit checks and registration took place in UA3 building. Due to the size of the course a simple A4 laminate map wasn’t enough and we were issued with a full A-Z map of Derry. This time we had to mark the maps using our instruction cards. We got the route marked and went outside for the race briefing. 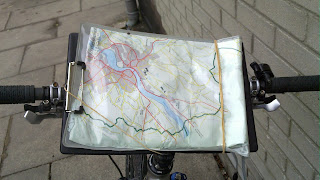 The start was a foot orienteering section in and around the grounds of the hospital. There was 10 check points and we could visit these in any order we took the reverse option and it seemed a better choice as it was less crowded or maybe it was just a case of us being so fast. On reaching our final check point we had a special task to complete.

Balloon Burst
We each had to blow up a party balloon until it burst. Not that easy after running around the grounds of the hospital. The lungs just didn’t want to work and this was just the start. Two almost simultaneous bangs and we were off to TA1.

The Bikes
We arrived at the bikes and I realised I had left my bike bell in the van. I quickly went back got the bell and we were off out the gates and under the Foyle Bridge. I was kicking myself at being stupid, losing all the time we made up on the run. Crossing the bridge I could feel the back wheel drag. Something was stuck between the pads locking them against the wheel. I spun the wheel back and forward and eventually it freed up. I continued on catching up with Andy but had realised I had made a massive mistake in not changing my tyres. I had a set of Super Tacky Highrollers on the bike and had forgotten to change them for my xc tyres the night before. I didn’t think they would have made such a difference but with the drag from the tyres and my body not full fit from my Flu it was beginning to show at this early stage. We followed the map to the Earhart Centre were we had a special task.

Build a Plane
We had to build a small polystyrene plane and throw it. This was a small 4 part plane. Body, wings, Tail and a weight for the front. I opened the packet and handed the parts to Andy one by one as he assembled the plane. Its inaugural flight was a good one and we even got a little loop before it settled back to land. Amelia Earhart would have been proud I'm sure.

Back on the bikes and following the Cullmore road it was back towards the city. Picking up 2 controls on the way back. One under the Foyle Bridge and one at an industrial site on the banks of the Foyle. We had to pick up the cycle lane and follow it along the Foyle stopping to remember a phrase that would be found on the jetty as we entered the city. "Time and tide wait for no man" We would discover this later in the kayak. Andy was storming along on his cut slicks. Helping me in any way he could punching a hole in the air so I could try keep a steady pace. We crossed the road just after the new footbridge collecting another check point. Turning left we continued to the Visitor centre. After we bidded in we were instructed to follow the city walls counting the canons as we went.

Canon Counters
This section was a run around the city walls counting the canons. We started at the entrance to the Foyle centre going clock wise 6 canons on this side, then another 2 then 3 more. We then started to confuse each other on our counts. A mixture of being tired and trying to keep moving made a normally simple task a bit harder. After taking note of another 2 canons I convinced Andy that our count was 13 at this point. Unlucky for some I thought but was sure I was right. With a further 7 facing the guild hall square it was back to the visitor centre with the result. 20 Canons it was thankfully. The ironic thing is it wasn’t that long ago I counted these same canons with my nephews. I will remember it this time. Back on the bikes for a cycle out of the city alongside the old railway tracks. The path seemed to go on and on. My legs and lungs were taking a real beating but I pushed on to the check point.

Time Trial
Just what I needed more cycling. I normally love the cycling and it would be one of my stronger if not strongest disciplines. Not today I wasn’t at the races at all. I think Shirley’s instructions were 2 miles to cover in 16 minutes. Andy took off flying along the path turning at the half way point it was a struggle heading back. Andy kindly offered me a break and we swapped bikes for a bit. I cannot believe the difference in tyres. I knew it would make a difference but this was very noticeable. Even though my lungs were struggling I was the one now pedalling out in front. I kept easing up for Andy so he could draft me. We followed the path back to the Craigavon Bridge crossing it and turning right we pedalled out to the Prehen Boat house.

Kayaks
The phrase from earlier ringing in my ear "Time and tide wait for no man" You don’t say. We paddled from the boat house heading along the banks towards the Craigavon Bridge. All the rain the past few days meant a real push in the flow of the river. It was aiding us on the outward journey but would make hard work on the return. We see Ivan on the banks and he instructed us to go under the bridge and paddle back towards the punch. It was hanging from a rope under the bridge. The punch card was in a map bag that was wrapped around my neck. Andy steadied the kayak as I struggled to get the card. I eventually got the gloves off and got the map bag opened and punched the card. Andy done a great job because the currents under the bridge were really strong. The return was hard work we tried to stay close to the banks to make it a bit easier. Even in this calmer water tiring bodies made it a struggle at times. I have to pause here and spare a thought for the teams that missed the instructions. They missed the check point and continued paddling under the bridge and further out the Foyle. When they eventually were spotted the word got to them to turn and paddle all the way back picking up the check point. Hats off to you guys that was some paddle.

Foot Orienteering
Back on dry land we got our route instructions and ran across the road and into a small wood for 6 check points. Autumn leaves made this a little confusing as it was hard to see what was a path and what wasn’t. Andy’s great work on the map made this a breeze with only one slight mistake adding to our time. Completing this section it was back to pick up the bikes.

Bonus Bike Loop
For us it normally wouldn’t even be considered a bonus loop. This is just part of the race. Today I almost give in and missed this section out. I knew I wouldn’t be quick but would we be quicker than the hour time penalty for missing it. I decided to go for it and Andy started on my bike but when we reached the turning point I swapped back to give him a break. It was my stupid mistake not changing the tyres it didn’t seem right Andy suffering. Thanks Big lad I owe you. We had three check points on this loop and one small single track section. Finally a bit of off road for the tyres. I wasn’t hanging about on this and made sure I made the most of the very small section. I think it’s the fastest I travelled all day.

We picked up the course again and pedalled out the limavady road to St. Columb's Park and Leisure centre. We were instructed to go around the side of the building for a special task. Inside the Leisure centre we went into the climbing room. 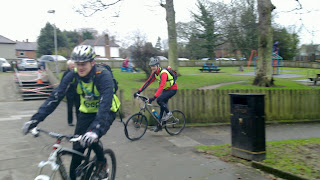 Climbing Wall
We had to boulder the wall from left to right around the room staying on the wall at all times. The foot grips were wet from the other teams which made it a bit trickier. The first side was fine and I moved quite quickly along this but on the next section I slipped and fell off. Composing myself I started again climbing along the last section and it was finished.

Foot Orienteering 2
We collected our maps and followed the instructions to collect 5 out of the 6 checkpoints. We knew we were almost at the end so pushed around this section picking up all the check points before returning to the bikes. Last leg was a cycle back to base picking up a check point on the way. I have to admit I was glad to see the end on a difficult day. Crossing the line was a great feeling as usual. 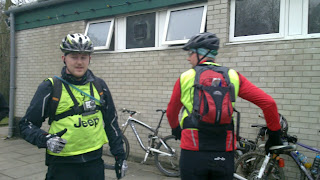 The course was brilliant and as always we had a real mix of adventure. Tip to anyone racing choose your tyres wise. I should have known this but I don’t think I will make that mistake again.

Big thanks as always to the CCAR team and all the marshals. Des for the great course and not forgetting Andy for giving me a break from the Highrollers. YO DA MAN!

See you all at Castleward for Round 4 on March 5th.