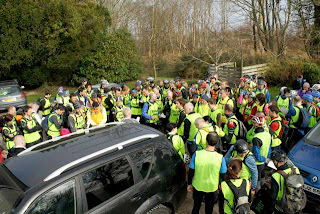 Castleward was the setting for the 4th and final round of what has been a great series. The final race was a big one in both competitor numbers and course layout. The race sold out and I think this is a credit to just how hard the CCAR team works in putting on a great race. With more and more people finding out just how great these races are. Hopefully the next series will be as popular. The bigger competitor numbers means there is racing throughout the field from the fastest teams to the first timers.

We left on foot from the race HQ and walked to the start at Castleward House. At TA1 we dropped the bikes of and started in team numerical order. It was a short run downhill to the orienteering stage. We got our map and headed of at a steady pace into the fields to collect 4 check points. This took us a bit longer than we had hoped because everything looked the same in the fields. We overshot one check point and took a while to locate it. After the first 4 we picked up the second map and headed back to collect another 4 checkpoints. On completion of the orienteering stage we were issued with our main map. 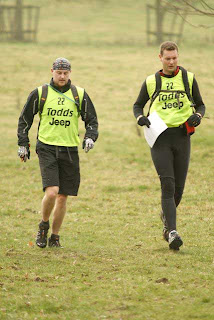 Still on foot it was a run around the perimeter of the castleward grounds. First check point was at a bird viewing point. Our special task here at the water edge was to find a stone and make it skip on the water two skips to complete the task. A nice flat stone and I think I managed 7. We had a bit of a choice from here use a compass bearing and go straight to the next checkpoint or take the safe option and stick to the perimeter paths. Safe option it was and we ran the perimeter. After this checkpoint it was back up to HQ for a special task.

The Two Planks, No not me and Andy the task. We would use the two wooden planks with ropes to walk around a short course. Team work and timing was needed for this task. Lifting our feet and pulling the rope at the same time left, right left right type of thing. After the task it was a run back to the big house for the bikes. 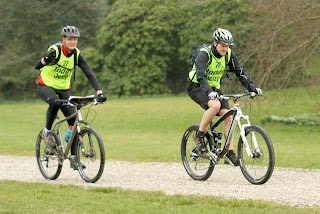 We would follow the red arrows to the Kayaks. We arrived at TA2 in the top 14 teams so had the kayak stage first.

Kayaks haven’t been my strong point but a bit of reading on technique helped a lot. Using the core muscles and turning my waist into the stroke made for a fast and much more comfortable paddle. 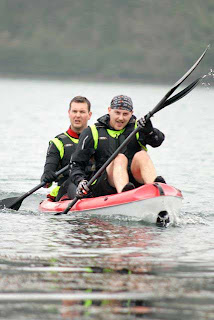 We past two teams on the water and caught a third team just at the finish. On our way out we met Tango and Cash steaming towards us. They give us a bit of a shower on the way past. I think they seen my technique and were a tad jealous. ;-)

After the kayaks it was back on the bikes for a blast on roads, paths, forest roads and muddy trails. Checkpoints were found on cairns, road signs and forestry huts. Inside and a fair bit outside the estates grounds. As we picked up checkpoints 18 and 19 in the grounds we rode back to TA2 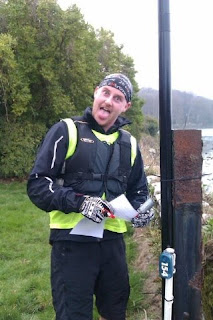 We were instructed to mark our maps for an additional 4 controls we would do this on foot. We would get a clue at each of these in order to find a 5th check point. We followed the Map picking up the first clue “Grid” It was pretty clear after this first clue it would be Grid Ref something or other. We picked up the next three check points and check point 5 would be found at Grid Ref. 567 492 Race HQ. It was a long uphill run over to this checkpoint and then we had a turn and run back to the bikes at TA2. From here we followed the same perimeter route we earlier ran on foot and this took us to the kayak check point.

We had a special task and one from earlier in the series so we knew what was required. I held the holes in a pipe while Andy filled water in a bucket in order to reach a ball within the pipe. After this we had the bonus bike loop. This was a long bike stage out onto the country roads. Head down, big gears and pedal as hard as we could. At the second bonus checkpoint we could see St Patrick’s way marked on the map. This turned out to be a narrow grassy, muddy lane. This was perfect for a couple of mountain bikers. Passing a team that was walking this section put a bit of a spring into our pedals and we re-joined the road again. Hopefully making up a bit of time on teams who stuck to the roads. After reaching Churchtown and bonus check point 3 it was back to the main gates of the castleward estate. We turned left onto the perimeter trail we had ran earlier. This was a really nice trail around these spectacular grounds. With check point 22 in the bag we followed the trails to Check point 23 were we had to complete a large jigsaw of a compass. There was a nice bit of natural single track trails through the forest enjoyed immensely knowing we were on the final straight. Back onto the forest roads for check point 24 then we pushed on hard for check point 25. The last check point was a long and energy sapping trail leading to the Race HQ. We rode through the Causeway Coast Adventure Race finish arch to complete round 4 and the series.
After we got changed it was up to the race HQ for a chance to refuel. Joan’s famous homemade cakes, buns, soup sandwiches were a welcome sight to a lot of tired faces. What better way to finish a race.

We had a great race and a great series. Massive thanks to Ivan, Steve, Shirley, Joan, Jonny and all the other helpers and Marshals. You guys done a great job putting on a great series for our enjoyment. I first got involved in the CCAR scene by helping and Marshalling at the events so I know the hard work and dedication by all involved. Finishing work on a Friday afternoon to go and lay out a course well into darkness, Early starts and late finishes. I think I speak for all competitors in saying your hard work is very much appreciated.
Big thanks also to Andy who turned out a great race partner getting stronger as the series went on. As his running improved my paddling improved. He helped me improve my paddle technique to the point we passed other teams with ease. In the run sections also we passed loads of other teams. Something we werent doing in the first race. Well done Big Lad your hard work paid off. The other teams better watch out next series as we will be back bigger and stronger.

Watch this space for a Series Report with the highs, lows and series results.


Pub to podium: Diary of a novice adventure racer.
By Andy Lyle
It started as one of those ideas, probably in the pub. Lets do one of those adventure races, we can already mountainbike a bit, I used to kayak at school, and I play footy once in a while, how hard could it be?

The seed was planted. So, when someone mentioned doing the whole series, that seemed like a good challenge.

It was this sequence of events that meant I found myself surrounded by lycra clad whippets* on a start line in Cavan, about to start my first race series.

I wasn't in great shape. Running to me was a swear word, something done after buses or footballs (well, occasionally, my team mates may wish to differ). My training had been minimal, a few walk/run sessions to compliment my mountainbiking and football exploits, but nothing serious. The reasoning behind this was we weren't doing this seriously, it was just a bit of craic, something to train for and keep the Guinness belly tamed. How hard could it be?

We started the race, were handed a map and off we went. The pack disappeared into the distance, somehow running and navigating all at once, while I struggled to find which way up it should be. I'll skim over the race details, but that day I was soaked, covered in mud, knackered, doubled over trying not to be ill, in serious concern my arms may fall off and strangely, smiling the whole time. It just looked like a grimace of pain...

We finished, in a respectable enough place (not that the place mattered, we were just doing this for fun, right?).

Actually, I was chuffed to bits! I was full of adrenaline, and happy brain chemicals, and was completely, totally and utterly hooked. I vowed to train for the next race, just so it didn't hurt so much! So I got off the sofa and actually went out running, and joined a gym so I could get a little fitter. Of course, only so I could enjoy the craic even more during the race. Its a strange phenomenon, even though you are flat out, you always manage a smile and a greeting when you meet a fellow competitor on the course, if only because you wonder where they are going!

So race two came, and amongst the lycra clad whippets* were some familiar faces, nods smiles and jokes were exchanged. The starting hooter sounds, and off we go again. Somehow, we get a result way beyond my expectations. Maybe it was the extra training, maybe the lessons learnt from the first race about navigation, or hydrating, or eating. Maybe we were just naturals (yeah right) but whatever it was, there was only one way to find out... Roll on round three!

Adventure racing is a team sport and this was ably demonstrated by round three. My race partner, Mickey, was recovering from a nasty dose of flu, but still made it to the start line, and fair play to him for that. We set off, and on the running leg I knew something was wrong. Why? Because I was nearly keeping up! So teamwork came into play, we helped each other where we could, punching holes in the air for the rider behind, even swapping bikes to take advantage of a tyre choice. We used our strengths, worked together and got round, not that we cared about a time or a placing. Much...

Which brings us to the last round of the series, and sees us surrounded by new friends with stories to tell and banter to share. The race begins, and for the next 4hrs and 42 minutes, we give it our all. We pushed each other to our limits, at least to my limits, with Mickeys encouragement and sheer pace driving me on. It was a long tough race, longer and harder than the previous rounds and a fittting finale. I must admit, the finish line banner was a welcome sight, but it came with mixed emotions. The race was finished, but the series was over.

So why be an adventure racer? Personally, I've lost weight, got fitter and can fit into those jeans again. I've achieved my goal of finishing all the races in the series and the sense of achievement that comes with it, re-awakened my competitive streak and now I'm looking forward to my next challenge. Oh, and don't forget the craic, the smiles, the encouragement from fellow competitors, the good hearted banter in the tea room afterwards, and the buns.


Actually, just do it for the buns afterwards, believe me, they're worth it...


See you on the Start line!

*Whippets of all shapes and sizes, lycra optional by the way!
Posted by Michael Regan at 04:02