I have not been running much this year.  5 days before the Causeway marathon the buzz from friends who had entered was enough to make me take the plunge and get entered.  I have never left it to the last day before entering I normally enter early with a great training plan in mind, then on the day of the event wonder why I hadn't trained.  This turned out to be a similar approach with regards the training side of things but because it was so last minute I didn't put any pressure on myself to do well.   A few fast 10k's here and there was enough in my mind to get me around the 13.2mile course.  I was well aware that it is a tough course with plenty of challenging terrain and climbing.  I was going to run at a steady pace and then ease into my stride and enjoy the run.  No looking at my watch, no crazy fast paced start or no racing early on!! 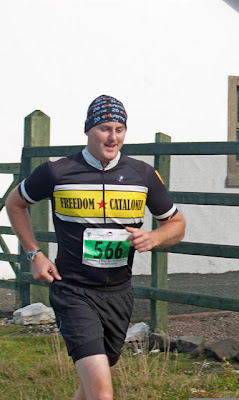 I am a great planner, analyse what my goals are, think about the best possible way of achieving them, memorise my plan of attack, then on the start line FORGET everything I have just said above!  I came here with no real goal in mind but one thing I wasn't going to do was race hard.  I didn't think I had the legs and to be honest I was doing this for the enjoyment and a bit of training for the wall duathlon in a couple of weeks.

The atmosphere at these events is always very special.  All kinds of athletes, friends, family, people running for a laugh, people running for charity and some serious runners.  That's what I love about this event no one is out of place and everyone seems to be there to enjoy it.  The start of the half is in Larrybane Quarry near the famous carrick a rede rope bridge.  The quarry is down a steep hill which we run up at the start. Turn around a hairpin at the top onto a grassy path. This leads along the top of the quarry walls across to Ballintoy Church.

On the bus ride over to the start I talked about the route with friends.  I remembered the last time I done the half it got congested at one of the first gates.  With this in mind I decided I was going at it from the start just to get a bit of free space.  No racing eh? That lasted a long time.  I jokingly said I would be first out of the quarry to the first corner.

Ian Cummings (26 extreme) give everyone the last minute instructions and it was time to start.  A few words from the mayor of the area, a roar from the crowd and the race was underway.  I got the head down skipped my way across the quarry and shortened my stride going up the hill.  I was true to my word leading around the first corner.  On the grassy path I kept the pace high without pushing too hard.  I had a quick look back and could see already a gap between the top 20 and the rest of the field.  My head was saying now is the time to ease into my pace and slow it down but I was feeling good and kept at it.  We got to the gate that caused the congestion previous years.  Through it without slowing and onto a downhill road section.  Again I decided not to ease up as I was feeling good.  We ran past the harbour and headed for the sandy trail that lead to whitepark bay.  I knew the reason why I was feeling good was it was so early in the race and I had to save something for later.

Whitepark bay was as beautiful as ever,  a very strong head wind made it a tough crossing.  As always any time I seen a runner with a marathon or Ultra colours I give them a clap and a few words of encouragement.  I got in behind a few runners and thought I would use them to draft.  It helped a bit even if it was just in the mind.  They didn't seem to like this and altered their pace so I went around them to give them a break.  They didn't seem to get the concept and raced passed me again so I pulled across to the side to run by myself.  At the end of the beach I had been passed by a few people.  I think this was part down to me clowning around for the cameras.  When we reached the rocky section a lot of the runners had slowed right down on the rocks.  This is the parts I love about the off road runs so skipped up along the biggest rocks taking a harder but more direct line passing most of the others again. 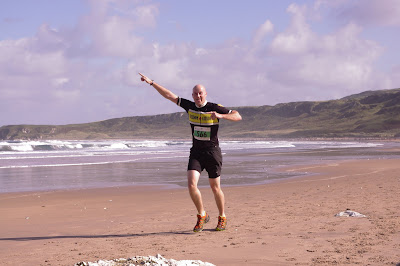 At portbradden we had a slight detour due to a landslide on the coastal trail.  Instead of following the salmon fishery trail through the hole in the rock, we had to run up the road.  I got the head down and pushed on passing a few ultra runners.  I normally only carry a few gels on a half marathon but for some reason I had a bag of tangfastics in my back pocket.  These where really spoiling a good run bouncing around in a pocket I thought was much tighter.  I would ditch them at the next bin then I seen the friendly face of Johnathon crazylegs Jones marshaling on the road.  I whipped out the packet and launched them to him. "Enjoy" I shouted to which he replied "Cheers I am hungry"  Turning into another farm lane we would follow this down to dunseverick harbour.  A few fields to cross then the biggest muddy section I have ever seen on a race like this.  I bounded through the mud lucky to keep my shoes on. 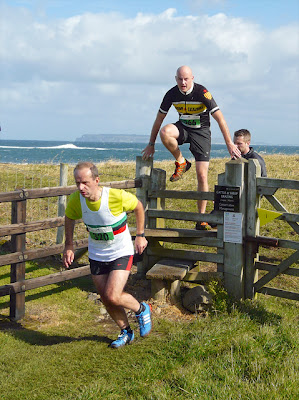 We crossed over the gate passing dunseverick harbour. As we got back onto the road, I started to tramp my feet to try get rid of some of the mud from earlier. I had a good laugh with another runner who talked about buying the lightest shoes he could find in the shop only to pick up half of his body weight on one shoe.  Thankfully by the time we got to the top of the road the most of the mud had gone.  We left the road and back onto the coastal trail. 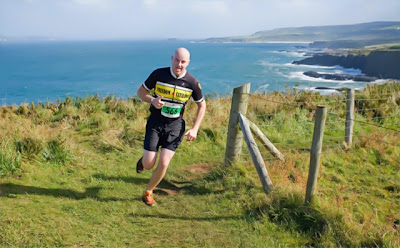 This is one of the most spectacular sections of coastline in the world.  To run through it just makes you feel alive.  The wind howling and the waves crashing on the cliffs below really makes it one of the best settings for a race you could ever have.  I was fairly comfortable at this stage and eased off a bit enjoying the scenery.  It was one of those days you had to watch your step.  The wind was strong and the wrong move up here could be the last.  I looked at the scenary and thought how good I was feeling and had a good smile to myself.  The trail followed the coast around to Dunseverick castle where there was some Marshall's with water.  I took on some water and on I ran.


I knew the next section had a lot of climbing and descending.  As we climbed the wind got stronger.  A few coves provided some sheltered and gave us I nice break from the wind. After dropping down a set of steps and climbing another we were hit by a massive breeze.  A few runners in front of me on rounding the corner took a few steps back it was that strong.  I let out a roar "Yeeeeeeehaaaaaaaaa" I put my head down tried to get as low as I could and picked up the tempo.  This continued over each high point of the cliffs with a sheltered bit in between but usually meant there where steps to climb.  Most of the steps people walked to get a breather.

I had a good chat with one of the ultra runners who seemed in great shape so far into the race.  He said the pain was there but he was in the zone and blocking it out.  He was trying to beat 7 hours so I left him do his own thing and continued at my own pace.  Near the causeway stones there was another water station.  I grabbed another cup of water and and slowly jogged down the busy path to the visitor centre.  Half way down Craig the ultra runner flew past me like he was in the 10k  I knew he was going well but I was also slowing too much.  I picked up the pace again for the runkerry headland.  Looking across to Portballintray I knew I was close to the end but the legs where getting tired and heavy.  Had I pushed to hard at the start? Probably but I was going to keep it going tired and sore as I was. 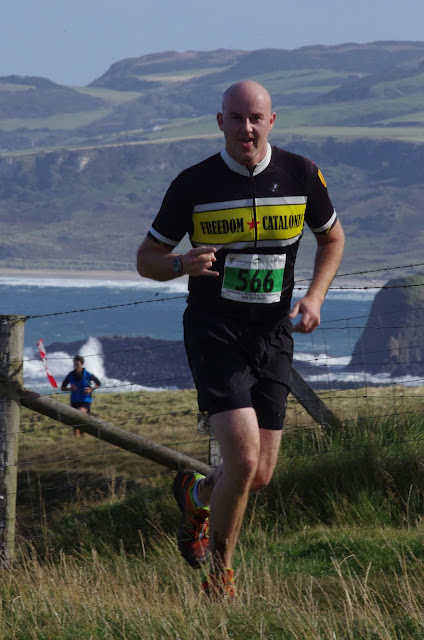 After passing runkerry house I knew it was a flat section back to the finish.  The sand hills on the beach made it fairly sheltered.  As I pushed on I started to get very warm.  My legs felt strong perhaps a bit heavy but no sign of cramp or strains.  The last push for the finish took us around the bush river board walk.  This section was very warm with the shelter from the large sand hills. I had my head down looking at the planks from the board walk.  A combination of the heat and the shapes passing my eyes I got light headed and could feel how tired I was.  I got the head up and started to take a few deep breaths as I ran.  Across the bridge over the bush and one last climb to the packed finish line.  I had a strong enough race despite the lack of training.  The only time I really felt it was from runkerry across to the finish.  Finishes generally are the time you feel tired but I normally have enough for a good sprint finish.  I didn't have anything for the finish line this time leaving it all out there. A great atmosphere as always to finish these events with the sound DJ's blasting out the beats for the finishers. 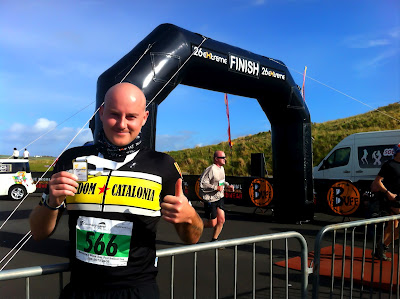 Finishing the race slightly under 2 hours was a shock to me.  I knew I was going fairly well but never felt I was pushing too hard apart from the very start. The smile says it all I love this race!!  If I can keep at it I will be back for the full marathon next year or who knows maybe the ultra...  one day.

Another great event from 26extreme.com

Next up for me is The Wall Duathlon 75km in the mournes.
Posted by Michael Regan at 09:38

I'm running the half this year and due to a combination of being a novice and not knowing a lot about the route I am undecided as to what type of shoe I should wear. All of my training so far has been on the road and I've been wearing Brooks Adrenaline's. Is this type of shoe suitable or should I be looking for a trail shoe? If you think trail do you have any suggestions?

Great Blog by the way!!!