The Redbull Foxhunt is a role reversal event.  The Fox (Gee Atherton) is the hunter and the hounds (400 Mountain bikers) are the hunted.  The aim for the hounds is to stay in front of the Fox until the finish line.  In reality for most it is to get to the bottom in one piece. In what is one of the most crazy Mountain bike races you could ever take part in.  The Rebull Foxhunt is a fast paced race with potential carnage around every corner. 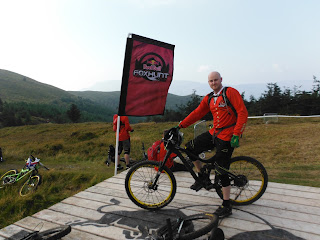 Social media was full of Redbull Foxhunt pre hype.  Everyone was buzzing with anticipation at the chance to meet and ride with two time Downhill Mountain bike world Champion Gee Atherton. 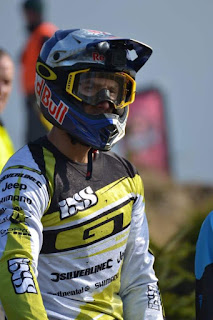 I had taken part in the Redbull Foxhunt Cavehill Belfast event in 2012. I had missed the 2013 event in Rostrevor to do a race in Catalunya.  I had a fair idea of what lay ahead but numbers were up this year with a record 400 registered riders.  The event sold out quickly due to the high demand.

Myself and good friend Barry McGuigan decided to pack up and drive down on Saturday night.  We joined the rest of the Klunkers and got our tent up.  I haven't slept in a tent for an age and it would tell, with little to no sleep. 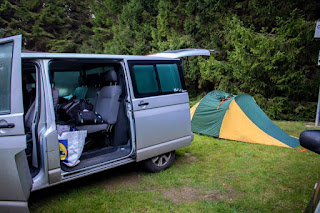 It was hardly ideal preparation the night before a race.  Thankfully the excitement of race morning cancelled out any bleary eyes. After a shower I was suited and booted ready for a fry in the Kilbroney Park Cafe.

We had to do at least 2 full runs to qualify for the main race. Everyone was issued with our Red Foxhunt hunting jerseys at registration.  Shortly after 9 Barry, Brendan McAleer and I rode over to the uplift tractors. 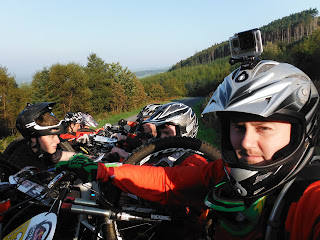 The tractor and trailer uplifts took us only half way up.  We had a bit of a push up to the starting point.  There was a chill in the air but clear skies. We didn't take long to warm up.  The push up path was steep so the legs, lungs and heart got a real work out.  Climbing out of the tree line we had a great view back down to Rostrevor village.  Well warmed up we didn't hang around too long at the top.  The plan was to get the two qualifying runs in as early as possible.  I took it fairly easy to get the legs and try and get a good look around at the possible passing places.  There was no point thinking about a racing lines. It was more getting as many options in your head as possible. Coming down with 400 or so others there is a good chance someone will be on your first choice line.  One run down we didn't hang about and headed straight back up for more.  This time I rode the top section at pace but slower down the last section. Stopping at a few areas to check out some lines and possible passing points.  When we got back down to the race village the place was bouncing.  Redbull Tent housed the DJ who was pumping out tunes. The crowd was rocking and ready for the final uplift to start the race. 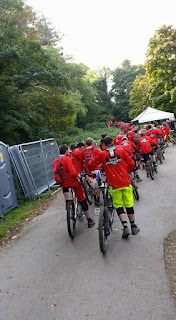 The uplifts were in full swing.  Tractors, trailers and the East Coast adventure buses ran uplifts flat out to get the 400 riders up.  After the uplift we began the long push up the switch backs through the trees.  You could feel the excitement building.  Like minded warriors tooled up heading to do battle.   A sea of red lined the top of slievemartin between the flags.  Tension was building as the organisers and Gee Atherton posed for photos.  Cheers went up as Gee wished everyone luck. The Honcho media drone flew overhead, everyone waving their arms to show they were ready.  Gee rode across to his starting point and the count down commenced.  Riders pushed forward to get as close to the front line as possible.  The sound of pedals clicking into place, Gopros powering on.  This was it...... 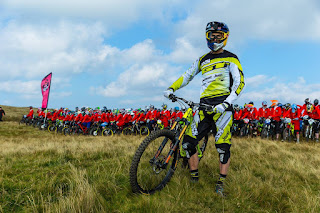 The hunting horn sounded with a prolonged rhythm of blasts.  I got on the pedals and pushed hard.  Banging bars and feeling bikes hit me from both sides.  Just as we made progress someone stopped in front of us and there was a big tangle of bikes.  I pushed forward hopping on one leg before getting clipped in again.  I cut to the right to try get a bit of free space.  The ground was rougher and the grass was deeper.  I dropped into a dip and rose back up out of a slight rise. Making a slight bit of ground to those on my right. The ground then fell away towards the bridge. 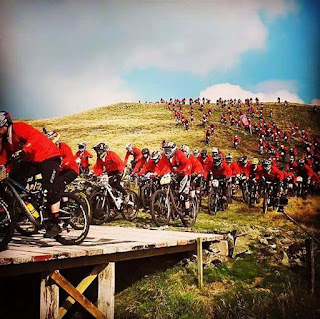 There was a mine field of rocks hidden beneath the heather and grass.  Hanging off the back of the bike I kept off the brakes and went for it.  As I reached the bridge already there was a bottle neck.  I rode across the bridge and and with a blast Gee rode past.  I roared him on and then tried to get moving but bikes and bodies all tried to fit into the single track.  It was moving very slow as people pushed past on either side.  The movement in front was slow and we were being swamped on either side.  I tried to encourage the riders in front to push on.  Eventually it started moving and riders mounted the bikes and a slow pedal commenced.  I got to the side of the track and started pedalling past others.  I then went into a hole and almost went over the bars.  Thankfully the back wheel landed again and I rejoined in behind a few riders. Pace was slow along the red trail and I tried to relax ready for the DH section.  Turning off the red and onto the grass I passed a couple of riders.  I got on the pedals and pushed hard.  Dropping down into Stevie-D's roller coaster the pace picked up.  Shouting up front at slower riders, trying to get past on the rougher sides.  It was a gamble some times riders moved into the path brakes on and a quick change of direction.  The dual slalom parts of the track worked great for passing.  Drops, berms and kickers on this fast section of track. 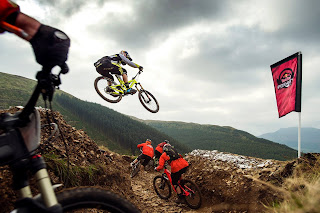 The ground steepened and tightened into single track.  This was the start of the idms track and probably my favourite section.  We rocketed around berms in a train of riders. 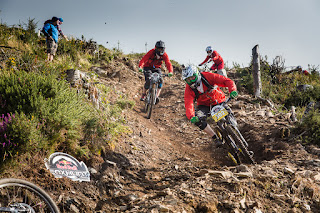 As the ground flattened out a bit a rider went down in front.  Others locked up and we were on the brakes trying to avoid a pile up.  One man went to the side and we dived past.  As the track split two riders went to the right and I took the chance and dived left.  I cut across the path of the riders and got away in front.  This section crosses the road and dropped into the Pulse DH track.  Rolling off the fireroad crossing the trail cut through the trees.  A catch berm and a small drop off before joining the main track.  The next section had multiple lines with some natural sections cut through the trees and others on the trail centre DH trail.  I was going well but catching people and not getting into a rhythm.  Shouting up for passing points and trying to think ahead what was coming next.  On a natural section two riders in front slowed up.  I was coming in quick and had to drop down into a newer line.  As I straightened up ready for a drop off the rider in front went down.  A dab of the brakes but then I had to go for it.  Hucking forward I missed the rider on the ground thankfully.  Carrying the speed I caught three more riders just before a rock drop. 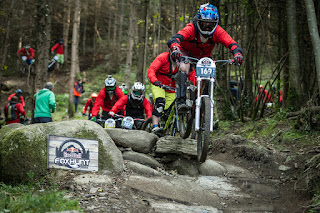 Looking ahead I thought about a possible passing point at the next hairpin.  Most riders went straight and I cut into the right sliding down a steep bank.  I rejoined the track sliding into another rider, shoulder to shoulder he went down but shouted for me to keep er lit.  I got on the pedals and pushed as hard as I could through the next bit.  As I crossed the fireroad I was again catching more riders.  There must have been about 6 riders all heading for the hecklers rock area.  One crashed over a rock. I got passed without issue.  Another went straight into a tree up ahead.  On the corner I had a rider on the inside and one on the outside with everyone trying to get on the same line.  I had to push and go for it.  It was like a slalom course in front with bikes and bodies.  I took a gamble and zigzagged through the fallen riders.  As the speed increased I felt a real boost dodging the riders and staying on.  I pushed hard jumping the next rock and rolled a wee double.  There was a small gap jump into the berm of Mega mission DH1 track.  On my last practise run I caught my back wheel. There was riders behind and in front. I played it safe and rolled around and dropped into the berm. 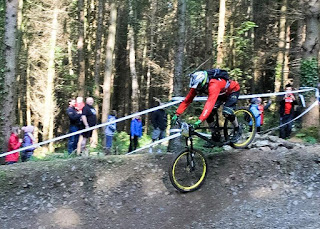 With only a few corners to go and the finish line jump I recognised one of the riders in front was friend Darren Wright.  There was also a female rider going well.  As we turned onto the tarmac I got on the pedals hoping to get passed both.  I went right but then Darren cut across right.  I straightened up and cut back left.  Darren passed the female on the right and I went by on the left pedalling hard up the finish line ramp side by side.  Darren done enough to stay ahead as we jumped into the finish area together. 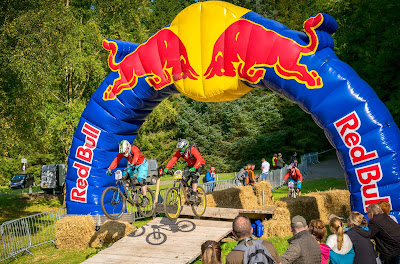 What a finish to an amazing race.  The finish area was bouncing with music and cheering spectators.  Every rider crossing the line with smiles beaming from ear to ear.  There was a mass of red jerseys doubling in size as a constant stream of riders jumped through the Redbull arch. 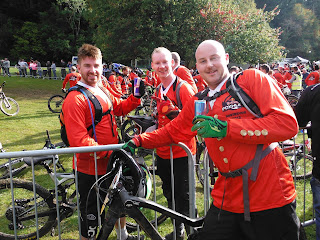 The atmosphere was electric with stories of how it went for each rider.  Reliving every bit of action for friends. They compared their runs with similar tales of carnage and big smiles.  This event is total madness but in a good way.  I had got down in one piece thankfully. We heard of others with broken bodies and broken bikes.  Riders continued to cross the line and as the gaps got bigger some completed the course on foot.  Punctures, broken chains and derailleurs just some of the mechanicals.  Gee signed jerseys and met the riders for photos.  The organisers got most of the riders under the finish arch for a photo. 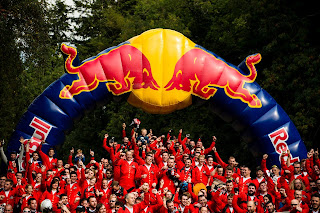 We were all on cloud nine getting photos at the finish arch.  I spoke to Colin Ross who took the win.  He told me about how he had a bad start and didn't think he was going to do it.  It was a super close finish with a great battle between Colin and James MacFerran. 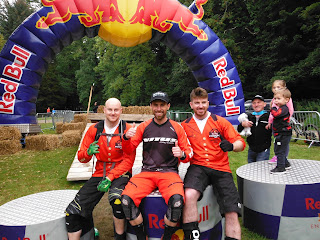 Gee then came over and asked for a photo with me and the boys.  How could we turn him down and he jumped in beside us. 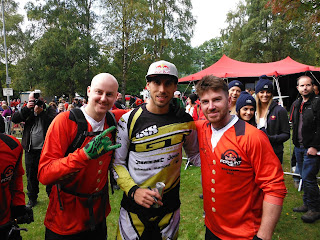 The event was another amazing experience.  It ran like clockwork and everyone really enjoyed it.  Irish Mountain biking is booming at the minute. Events like this showcasing to the world what we have here can only be a good thing. 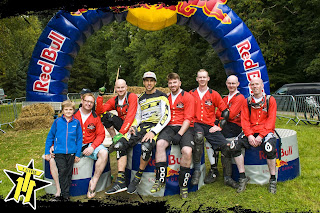 Thanks to Redbull for another top event.  PlushMTB club who done a great job pulling the event together.  Stephen Davidson for his superb trail building skills.  Also Barry and all the lads for making it a weekend to remember.  More of the same in 2016.

Watch the video made by Honcho Media: