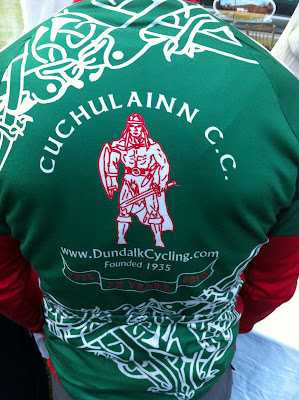 Last year I battled the 12 hours solo. This year I would represent 26extreme as there second team of two. Rowan and Ian 26extreme directors would make up the other team. Myself and fellow adventure racer Paul McArthur teamed up for the first time. We know each other through racing back grounds but in a race like this we dont get to chat. Pass the batton and pedal so to speak. 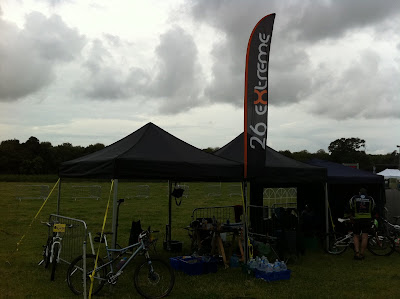 Thankfully I didnt have much to do in the way of preparation. I was told to bring my bike and kit to the pit area the rest was taken care of. Rowan and Ian had everything set up the night before the race. Two Gazebos side by side with tables, chairs and enough food to feed an army. 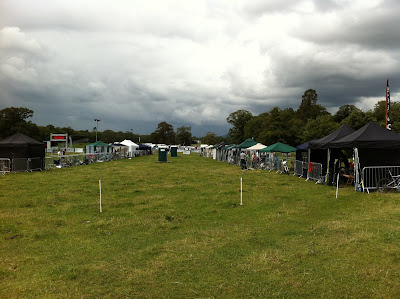 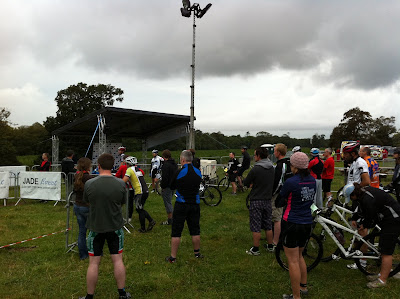 The race briefing was short and Tony wished everyone a good race. The course was slightly different from last year. There was a new start/finish pit area and a new field crossing, with some additional sections like jumps and berms on the older parts of the course. 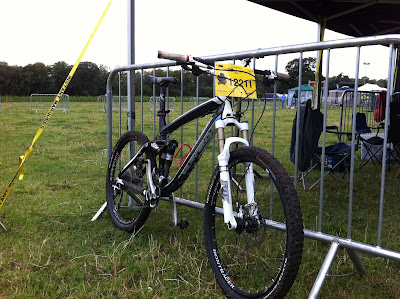 This was the first time I raced with tubeless tyres and half way around one of the laps I was so glad I was on them. High Roller 2.1 front with a Larrsen TT 2.0 on the back. 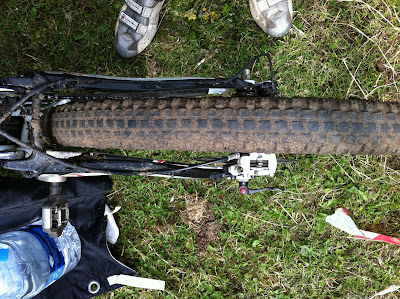 The le mans style start give us all a good chance to spread out. The air horn blasted and we were of. I was starting as Paul thought it a good idea since I knew the course. First lap is always a bit hectic with some bottle necks on the more technical stuff and people stopping etc. 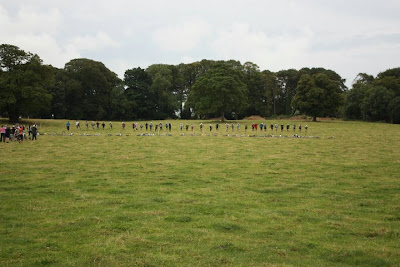 When we exited the pit field we were straight onto a muddy lane that led to another field. This was an up hill on energy sapping grass. The pace really slowed on this section as the day went on. Thankfully though it didnt last to long and had a nice descent and flat section to recover. Probably the only climb with a chance to recover after. 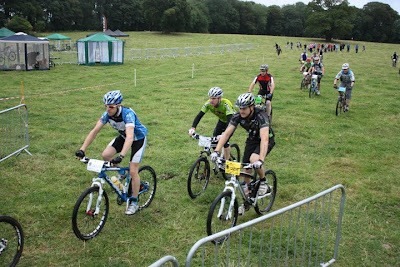 (Thanks to Aidan Stewart for the photo above)
After the field there was a great descent through the forest. This was a very fast section and a nice break after the first climb. There was a left turn onto a lane which took us in a u shape back to the forest. 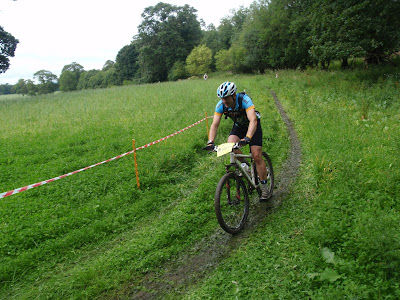 The fun really started here. This was a long climb with very little let up. Switch back after switch back on single track. Some of the switch backs had rocks and roots with really only one line to get it right. With a tight pack and riders not getting that line there was a bit of a hold up at times. Reaching the next switch backs I tried to hold back a bit so I had a good run but the stoppers in front held us up again. The next straight I got past a couple but it was a very hard section to pass and with everyone out on there first lap people didnt want to loose time moving to the side or stopping. With a bit of a gap between me a the riders in front I got pedaling. 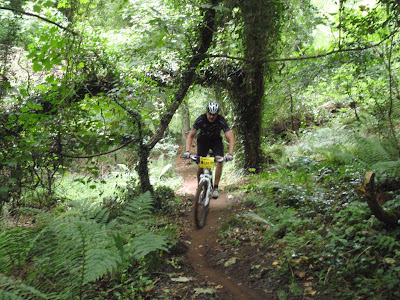 After the climb there was a wall crossing with I think three options. Wooden section with a berm, Rocky section or a flat section. The wood seemed like the fastest line and was definitely my type of line anyway so I stuck with that all day. The forest single track went on and on. There was a new jump and berm added from last year. This was brilliant and was a much faster line than the old way which was still in place for riders who didnt fancy the jump. The course flattened out a bit after this but it was very technical with rocks and roots all over it so you didnt get a minutes rest. After the rocks came another climb with rocks and roots dotted all over the trail. I remember struggling on this last year with dodgy gears but this year I took it fairly quickly staying in the saddle for better traction. The climb continued but got a bit smoother. The next wall really got me on a couple of last laps last year. I would have the last laugh flying over it this year. Either it got easier or I was pedalling better or a mixture of both. It was a steep incline over a wall with a wooden descent on the other side. The next section was great very fast flowing trail with bridge crossings fast corners and a few sections that could be ridden like a pump track. I think as last year that was one of my favorite sections and hopefully one I made time on. The fun continued still all on single track with fast descents and climbs. Hamburger hill again brought a smile to my face. Technical drops over roots, rocks and tight tree's. As some found out them rocks are hard to land on. There was a new table top and berms before we entered another lane. The lane took us around the same field we started on last year.

This is where the difference in the track came in. We would now be finishing on the first section from last year but cutting out the mx track. We entered a gate and on turning the corner I thought to myself is this the right way as it was a barley field. The markers showed we went through the field in a zigzag patern before climbing up through a few trees. Last year we went right and into the mx track, this year it was straight and down a very steep descent similar to a bomb hole in the forest trails. After a tight climb up the other side it was back into another barley field. This was I think the highlight of this years race. Instead of riding the perimeter of the field the markers went straight through the barley. The barley was waist high and the passage through very narrow. The trail through was on a very fast descent leveling off at the bottom before leaving the field onto another lane. 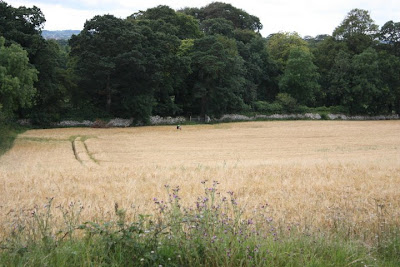 (Thanks to Aidan Stewart for the photo above)
I think for me the reason it was so good was the barley so close to you and pedaling flat out through a field like this you would never get the oppertunity. Unless you rode it you might not get what I mean but it was a great addition to the course. Just a good job there was barley in the field or it would have been a bit pointless ;-)

We crossed another field and had a road crossing instead of the bridge crossing from last year. After this we were back into the tree's. More very tight single track with bridge crossings and a few rocky sections that with a bit of pace werent a problem. After this came a last tight wee slope up outta the trees and back into the start/finish field. With the spectators watching I think everyone stuck the shoe down here and blasted across the finish line. 00:54:33 for my first lap it was a good lap with a few slow bits on the climbs where the bottle necks happened. I quickly passed the chip to Paul and with a good luck he was of.

Time for warm clothes, a seat, a sandwich and relax.

Paul came in after his first lap and told me it was a nightmare on his tyres. Not having time to work out lap times I thought he had a bad lap. Looking now at the times he shouldnt have worried he put in a great 00:52:58 I got the pedal down and went out again. After hamburger hill I came across Debbie Irvine who had went down hard on one of the rocks. She had a very deep cut on her knee but the blood flow didnt look that bad. I had no medical kit so the best I could do was tell her I will shout for the medical crew as I remembered they were parked just after this section. I didnt realise they had already been alerted to this and were looking for Debbie. I jumped off the bike and gave them a shout telling them she was just a few hundred yards back on the trail. I got back on the bike and finished the lap. 00:55:36 with a stop I was happy enough with that one too.

The talk in the pit area was about Debbie and the cut she had on her knee. It was a fairly bad one and I assumed she was out for the day. Little did I know she was bandaged up and back on the bike. Coming into the pit area to finish her lap I think she should have got an award for the bravest lap of the day. It turned out to be the end of the day for Debbie with a trip to A&E but she came back to cheer on her warrior team mate Molly Stack who blasted out the remainder of the day. Another great effort from two very strong Ladies. Well done to both.

Turns out Debbie has a hairline fracture on her knee. Cant praise that effort enough for finishing the lap. Heal fast Debbie.


Paul had changed the tyres for his second lap hoping to find a bit more grip. It was another good lap finishing 00:56:51 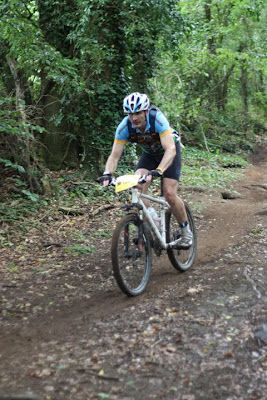 (Thanks to Aidan Stewart for the photo above)
My next lap was another decent one with no real dramas. The only worrying time was when I heard a hiss from my tyre. Thinking I was going to have to run back having no tubes the hissing stopped. The stans no tubes done its job well sealing the hole and on I went.

The time ticked down and lap times dropped a little. Paul was getting slower but still finishing strong every lap. I could feel I was slowing also and with one very near miss on Hamburger hill (Which I think should be re-named Debbie the warrior hill) I got a bit sideways on a landing but thankfully saved it and rode on hard. I decided to take the last lap a little steadier a mixture of tiredness and a sore bum made it more of a cruise than a racing lap. Paul went out on his last lap and when I realised he wasnt going to finish inside the time I got my self cleaned up and changed. We managed 12 laps in the end. Tough slog at times but always very different and enjoyable laps. 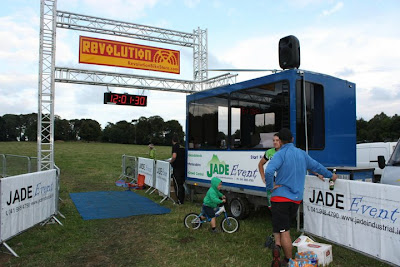 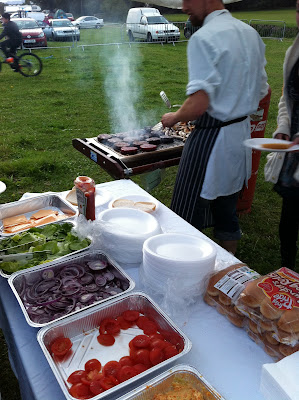 The finish area had the legendary BBQ and fire already roaring. Stories of laps both fast and slow and how great the course was could be heard by all. 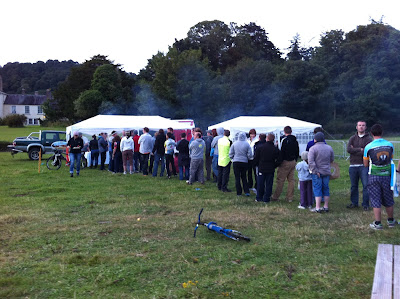 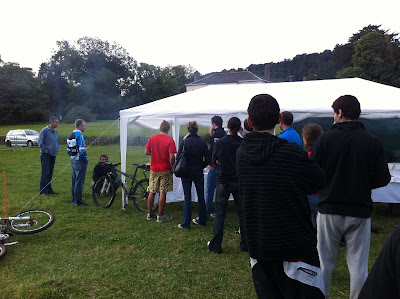 Big thanks firstly to 26extreme for the oppertunity to race under their colours. Secondly to Paul McArthur for sharing the pain. Last but not least to Tony Kelly and all the others from Cuchulainn Cycling Club for putting on another great race and post race BBQ, without your efforts we wouldnt have been there.

A mention also to all the other riders for the craic along the way. Good to see everyone enjoying the racing. 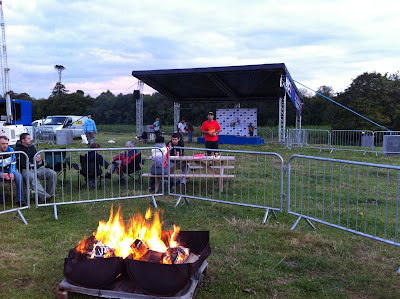