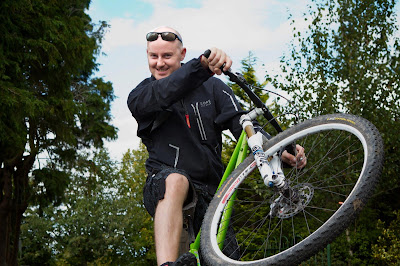 When you think of a world championship cycling event you may picture finely tuned athletes with one goal in mind, to win the gold medal. This event was so different and in so many ways. There still was the odd finely tuned athlete amongst the crowd and the very odd person that seemed to be taken it seriously. Even the eventual winner Niall Davis was so laid back he only converted the bike to single speed the day of the event. The biggest difference was the overall winner didn’t receive a Gold Medal they got a Tattoo. The one rule of this competition is “If you don’t want a tattoo, don’t win” 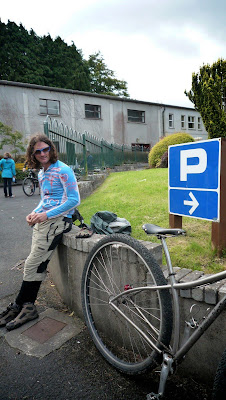 So what is it all about? I would describe it as a festival of one geared bikes. The event started for Ireland last year by winning the right to host this year’s event back in New Zealand. The proceedings started on Thursday night in the Locke bar in Limerick where the competition would take place to host next year’s event. Drinking games, hula hoops even a rendition of Riverdance was used to pick next year’s hosts. South Africa took the honours with an outstanding display on the night. 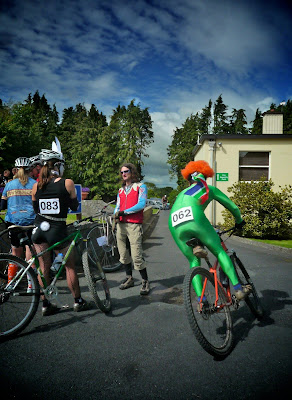 I think judging by the remarks the organisers may have had to remind them the next day of their win. Sore heads all round and next up Kilfinnane Village for the event HQ. 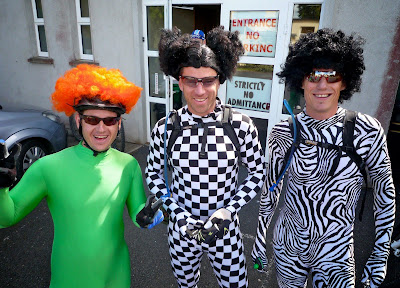 With most competitors arriving in Kilfinnane on the Friday the town was electric. The local football pitch was used as a campsite with additional camping and dorm accommodation at the Kilfinnane Outdoor Education Centre. The village was small and I think this added to the atmosphere. Some riders took the Friday afternoon to go out the 7km to Ballyhoura trail centre to check out the course, others went straight to the nearest pub. Friday night there was a festival on the town street with traditional music, Irish dancing and singing.

I don’t normally ride single speed but with this event on my doorstep and having tried single speed in Catalunya during the summer I couldn’t say no. With my knowledge of single speed conversions limited I asked event sponsor Chris Butcher of Revolution Cycles formerly Unicycles for some advice. Chris told me that I could convert my bike to single speed but if I wanted I could take one of his shop bikes a Niner S.I.R.9 The offer was too good to refuse and I arranged to meet Chris at the event registration. 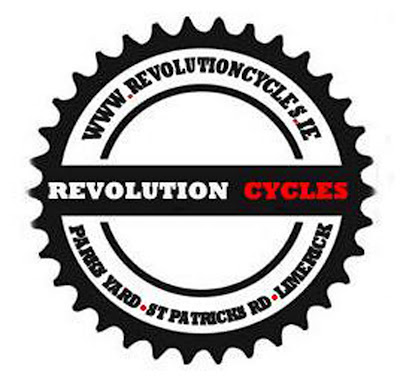 When we arrived to register there was already a line of bikes sitting with Chris and his staff. Conversions, servicing and last minute mechanical issues were in full swing. With the lads doing a great job on the bikes and the fast turnaround time word spread and they were kept busy right up until the race briefing. I don’t think there was a problem to big or too small for the lads with everyone leaving happy. Great bike servicing and advice from a biker who just happens to own the shop is always invaluable.

Saturday was race day with the briefing at the Marquee at 13:30 I think the late briefing and 15:00 start time was to let the party on the Friday night continue into the early hours. There were definitely no complaints from anyone for the later start. The town was packed with colourful bikers. No not lycra clad cyclists, fancy dressed cyclists. With only a few cyclists in cycling gear they almost looked like the odd ones out. Scooby Doo, Storm Troopers, Leprechauns, a full wedding party including priest, Badgers (Yes 6 big Badgers – or to be more precise www.trailbadger.com) 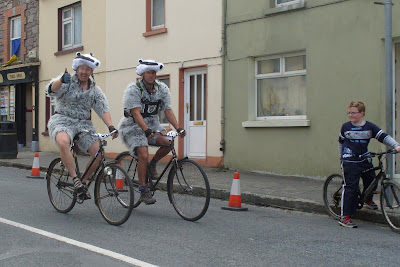 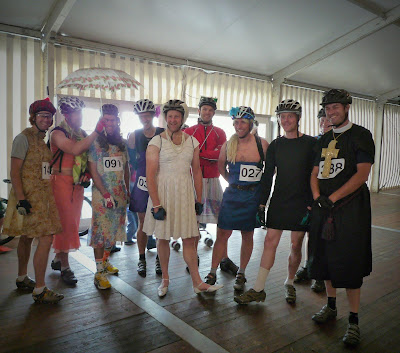 The atmosphere was amazing with photos being taken of the outfits and pleasantries exchanged. The race briefing told us we would all travel by Garda (Police) escort from the village to the Ballyhoura trail centre. The bikes were to be left upside down along the fire road and we should make our way back down the hill to the car park.

The briefing finished and everyone got on their bikes to pedal through Kilfinnane. Locals lined the streets cheering and clapping with more enthusiasm than a Tour De France town. The ride out was full of banter and excitement. Seeing different costumes and listening to stories from the previous night. 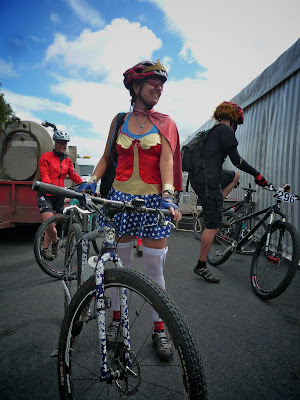 The journey out was a laugh a minute. People drinking beer out of there water bottles, nearly crashing into walls, costumes falling apart. 7km done and already people were talking about their next beer. We reached the forest and bikes were left upside down as instructed and the beer tent filled up. With a DJ pumping out the tunes the atmosphere really lifted. The dancing started and this looked more like a music festival than anything bike related. A few last minute words from the organisers and it was time to start.

The starting arch lead us out through the car park were we would run up the fire road to the bikes. The race hadn’t started two seconds until complete madness started. Most competitors turned right and ran up the banked hill to take a short cut to the bikes. This was to the spectator’s amusement as they watched some serious competitor’s head of firstly away from the direction of the bikes on the actual fire road. 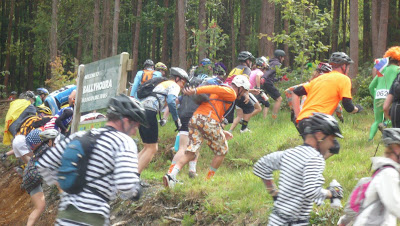 It didn’t seem to matter though because unbeknown to us while we were at the start the bikes were being moved, hidden and stacked in piles. As I arrived to the bikes the same shouts were ringing out “where the f… is my bike” “That’s my bike at the bottom of that pile can you move yours” 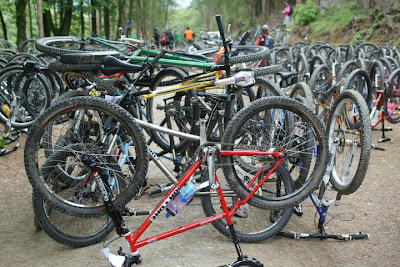 The laughter got louder as people stumbled over bikes and tried to get through the crowd. I was very lucky as mine hadn’t moved to far if any. As it wasn’t my bike I had a hard enough time trying to find it let alone it being moved. 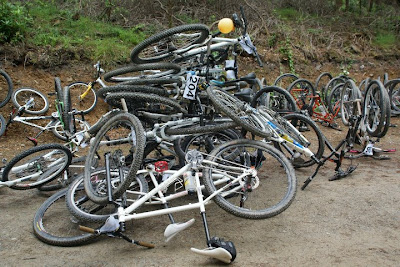 The race would be two 17km laps of a circuit that consisted of fire roads single track and northshore/board walk. The start was always going to be madness with the single track getting bottle necked but I don’t think anyone worried too much. We could see more locals at different junctions on the course cheering us on and shouting encouragement. The trails were brilliant and with people in such good mood riding together everyone seemed to have a smile on their faces.

The winner Irishman Niall Davis of biking.ie blasted the course with last year’s winner not far behind. In the female category American Heather Holmes took the victory. Both went straight to the tattooist who was brought in especially for the event. What a great memory of your world championship win. 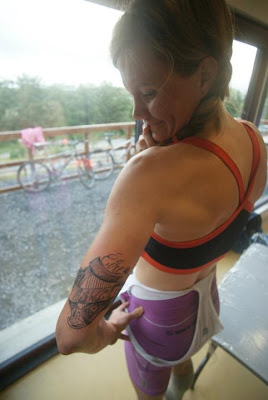 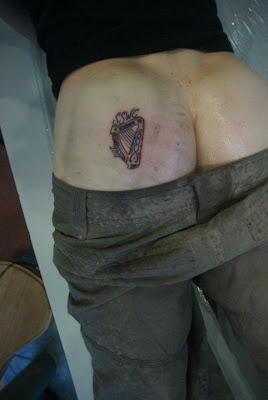 The weekend turned out to be brilliant. The locals really made it and the other competitors just made it one big laugh from start to finish. Well done to everyone from the organisers to the locals to the competitors. A weekend to remember.

I later Spoke to Chris Butcher about the event and about his plans for opening a new shop Revolution Cycles. Chris ran Unicycles but with his contract expired he has decided to set up a new shop. Chris told me "I first got into bikes as my parents were always cyclists, when I was only a few months old they went on a cycle tour around Asia with me on the back of the bike!" So how did you get into singlespeed? "Singlespeed I kind of fell into, I wanted a low maintenance bike to cycle to work so I converted an old beat up Trek to singlespeed and rode it to work. I loved it so much that I started using it on the group rides and then went and bought myself a Kona Unit singlespeed and my love of singlepseeds grew from there. Right now out of my 8 bikes only one has gears!" What did you think of the event? "The event was awesome, great event, loads of characters and I'd love to see something happen like that again.

Chris hopes to open the doors of the new shop mid September. If you are ever in the area call in and say hello. Keep up to date on the new shop at the facebook page linked in the logo above.